Hello, I have a love Rock model with the serial number F0601259.
I've had it since 2010 and have played it a lot but stil dont know where its from.
The headstock is different from anything I have seen on the web, looks kinda like an Epi. Judging from the scratches the body could be mahogony, the neck maybe not so much.
I have some pics If anyone can help.
Great guitar btw, Its been through a lot, 3 albums, 100+ gigs, still plays great. 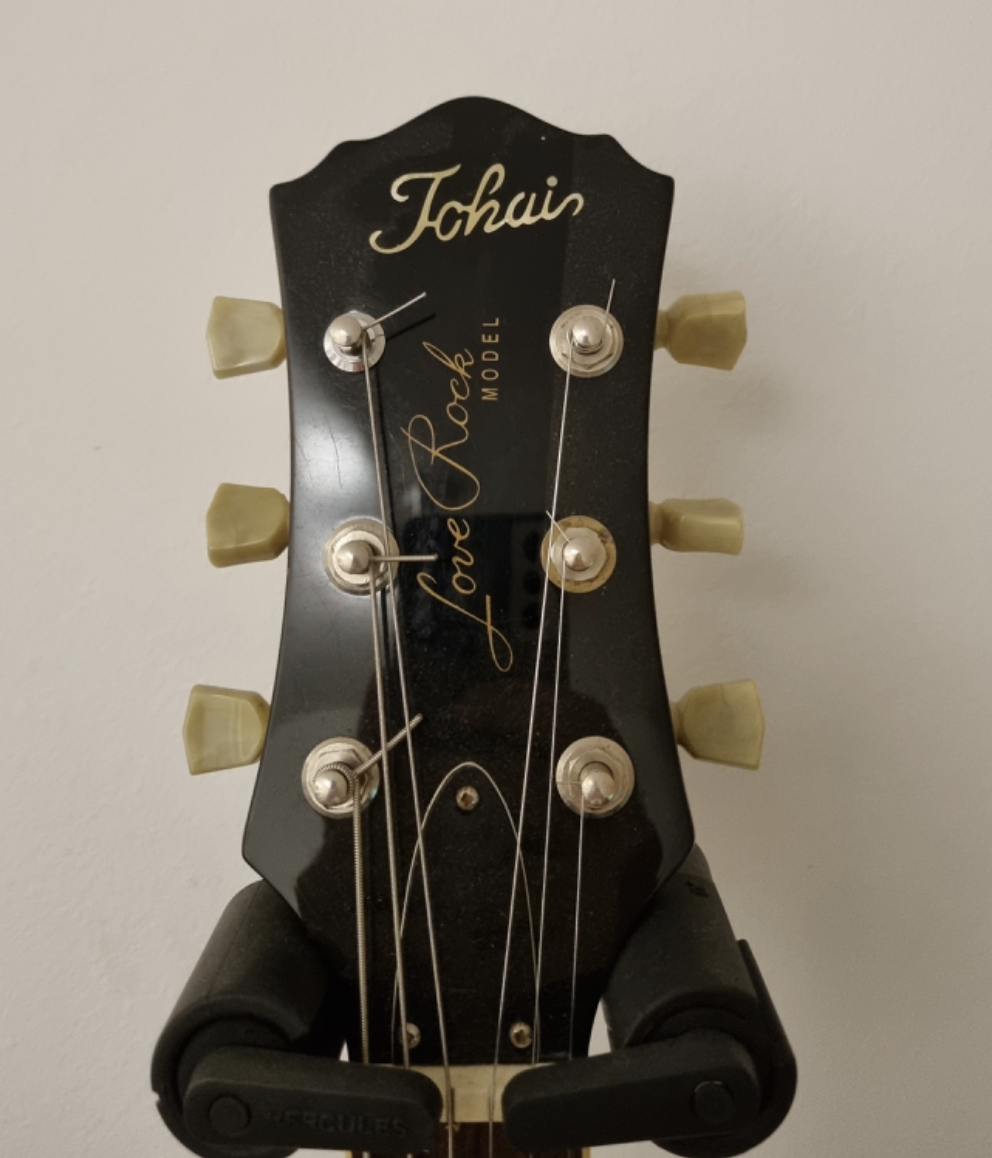 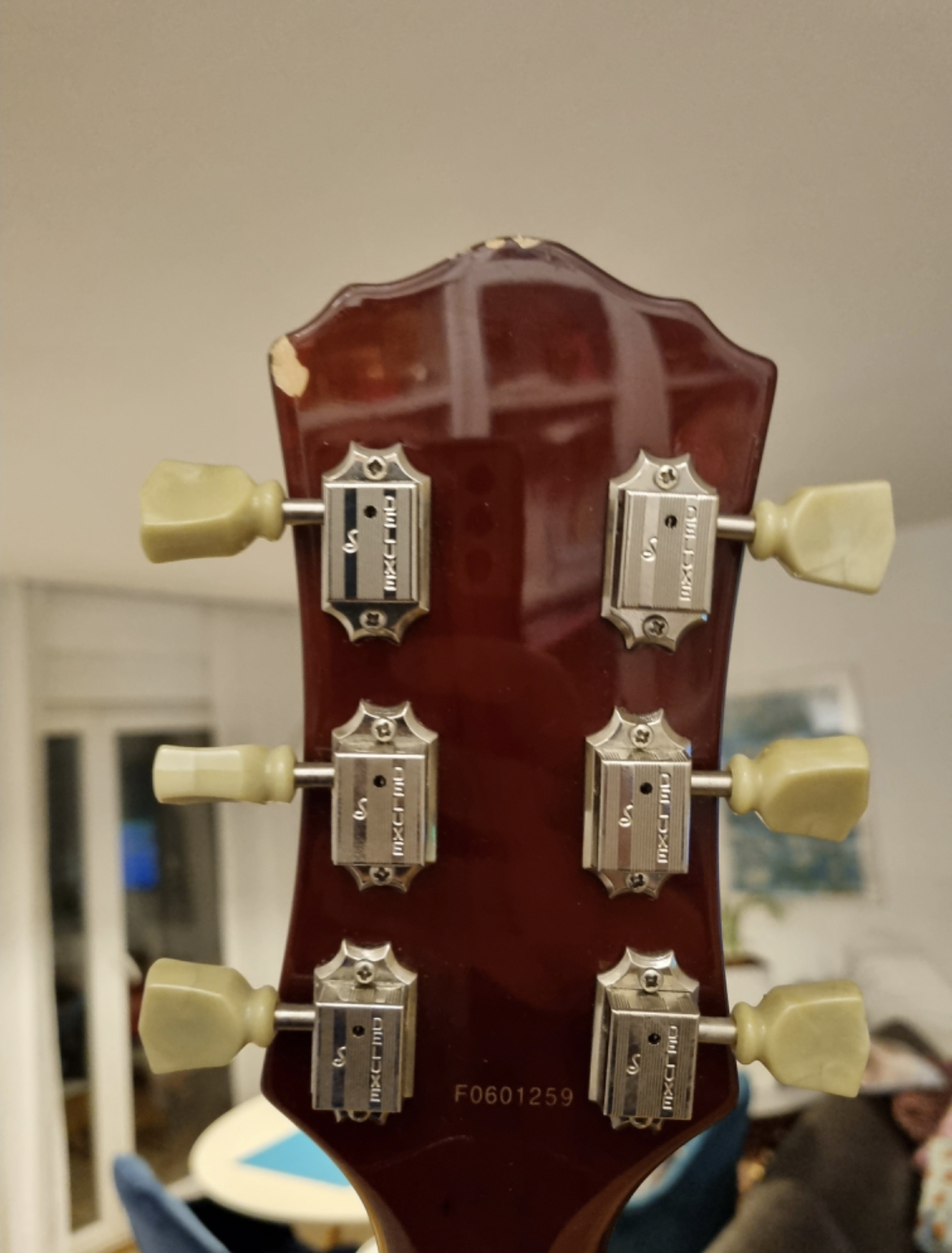 These are odd. They’ve popped up from time to time. 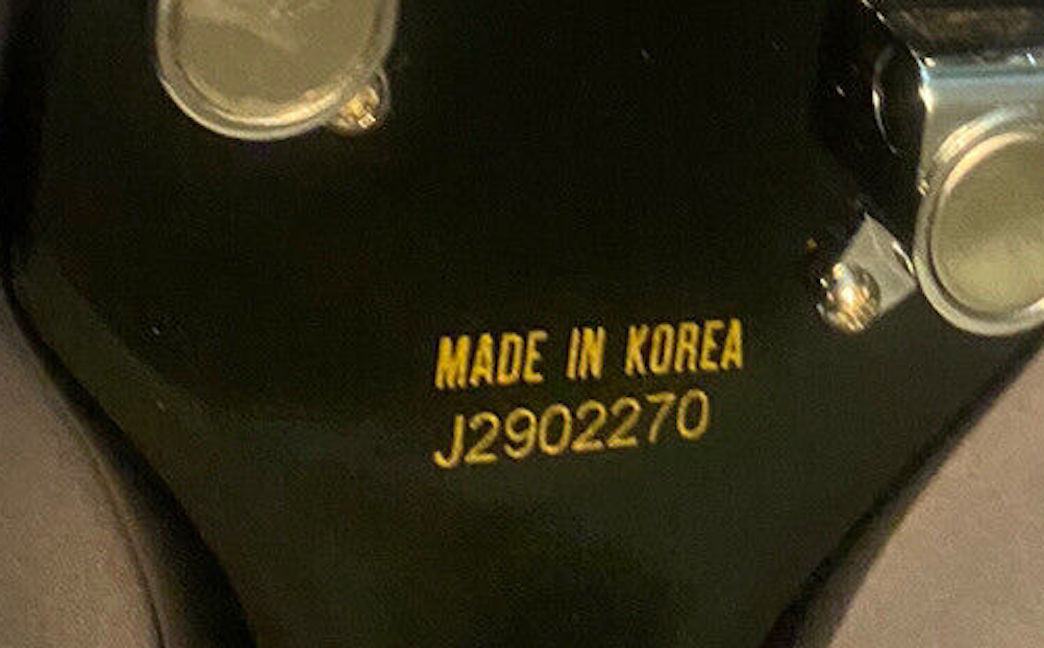 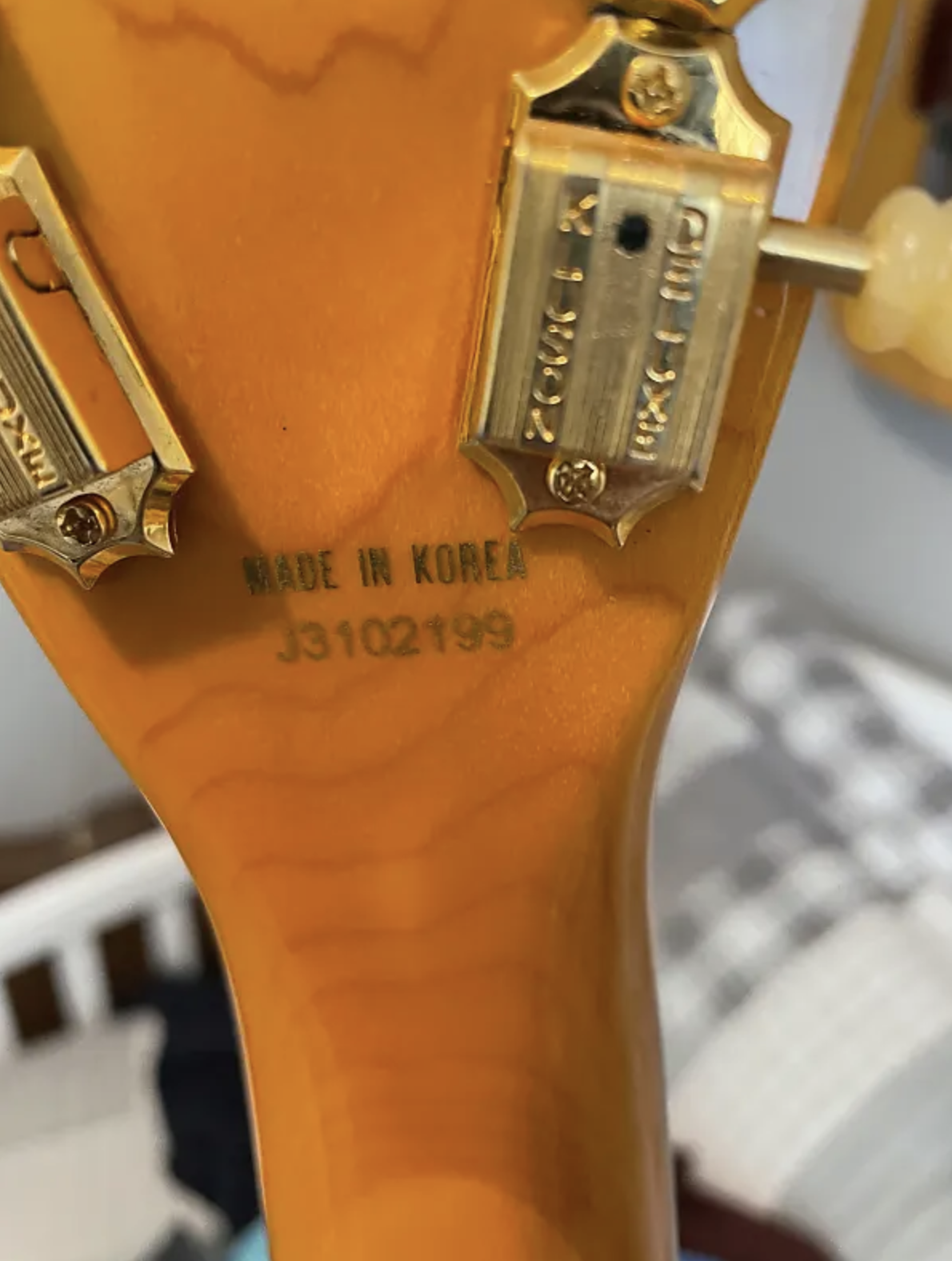 Sort of looks like they had excess Epiphone models to dispose of! :lol:
P

With letters in the serial number and made in 2010 it's going to be Chinese. The shape could be a USA version to avoid Gibson trademarks.

Ibanez (Fujigen) used a similar shape in the late 70s and early 80s on the Musician line, the FA models, etc. 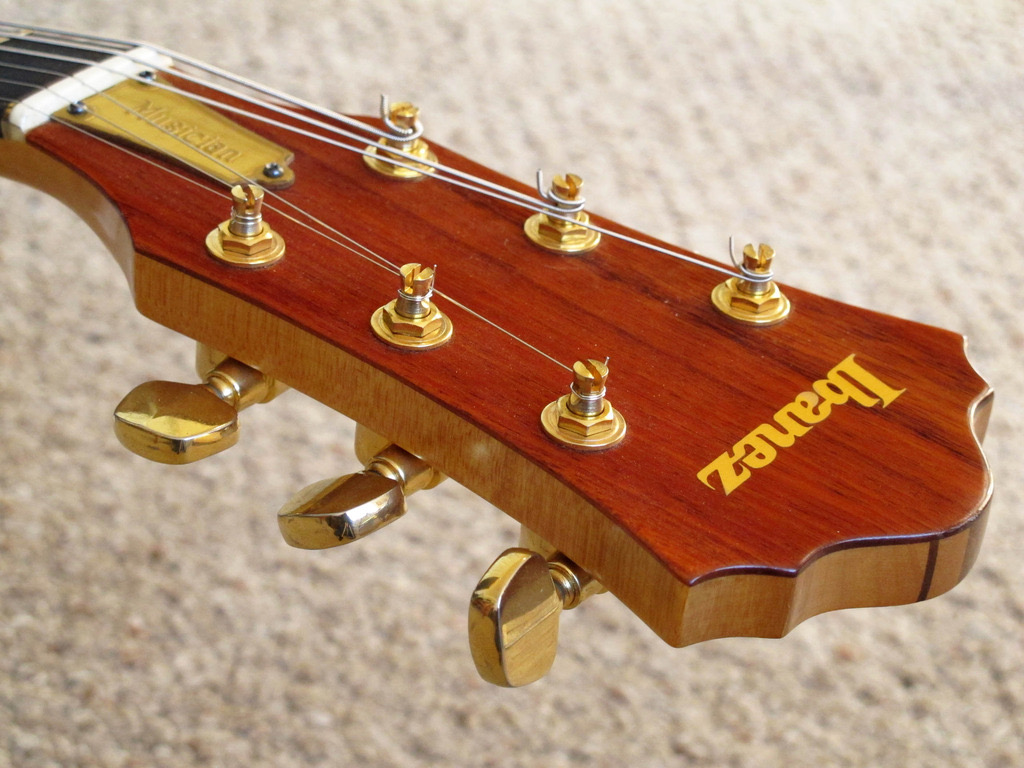 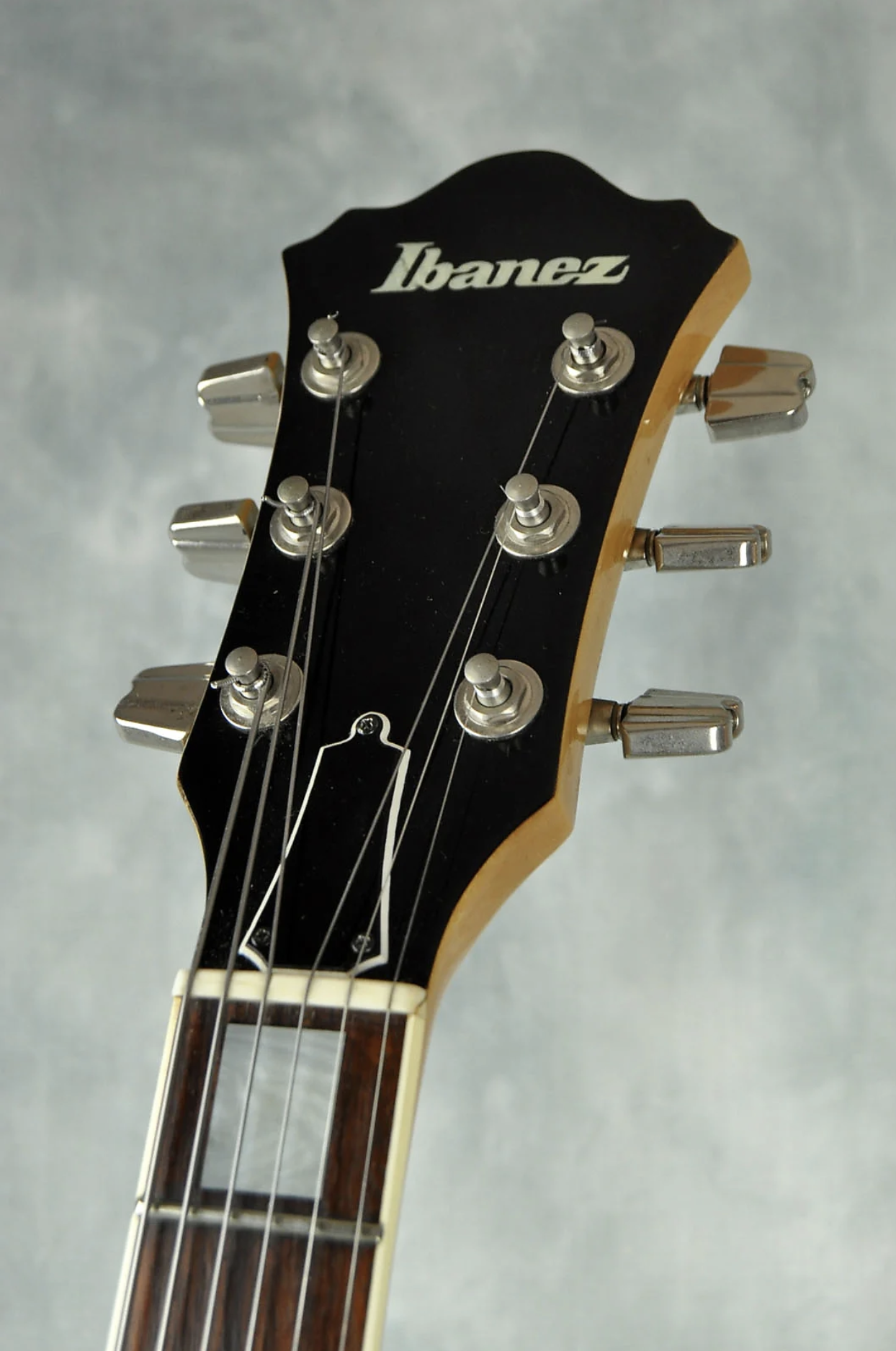 Again, I have never seen a Chinese Tokai with the serial number located where yours is.

I have seen guitars marked "Made in Korea" with the numbers in the same spot with the same font (shown above).

I guess it's possible they could have been made in China, but stated in Korea, as suspected with the Fakais?

Tokai's production in Korea and China has always been shrouded in mystery and they have intentionally kept it that way.

Thank you for the info guys. I bought it second hand, it already had a Seymour Duncan 59 set on it, so it was a great sounding guitar, and the neck is really nice to play, slimmer than your avarage LP, one od those guitars you pick up and then its hard to put it down.

Im playing my first gig in there years so I think I'll fix it up a little, maybe put a papir od humbucker sized P90s, or the Wizz premium PAF clones.

Has anyone tried the 90 on your Tokai? I think they never made Love Rocks with P90s, or did they?

Nemanzg said:
I think they never made Love Rocks with P90s, or did they?
Click to expand...

Here’s a link to catalogs so you can see what models have P90s.

I removed the pickups and Took some photos. Honestly, I dont know what Im looking at.

Looks like a Basswood body to me. Not a problem or failing.

The Chinese and Korean models typically do not use more expensive woods like mahogany to cut costs. The wood is typically stained like mahogany and can be hard to tell what it is from a distance.

I am noticing the blue and red wire as well. Something seen on Chinese and Korean Tokais. 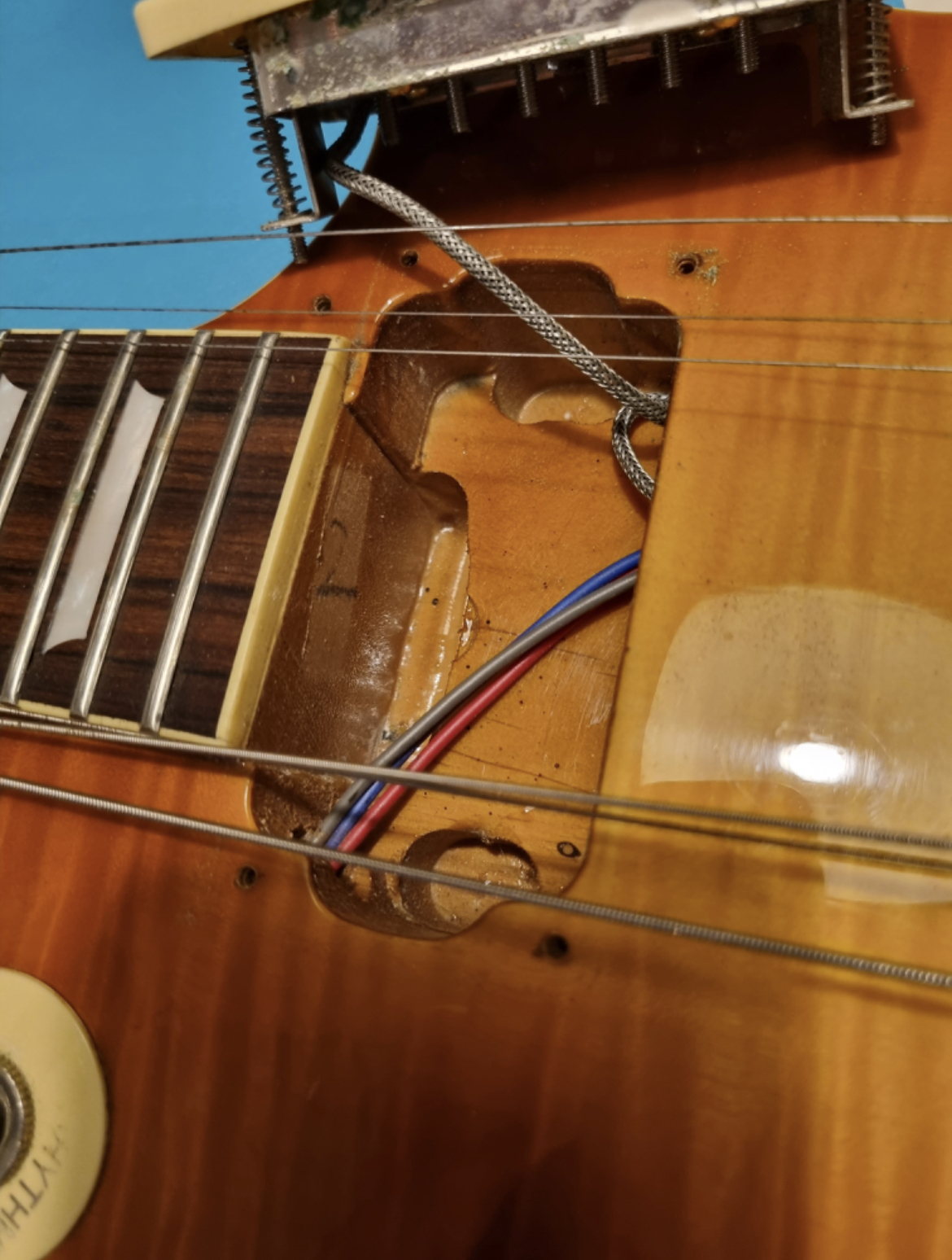 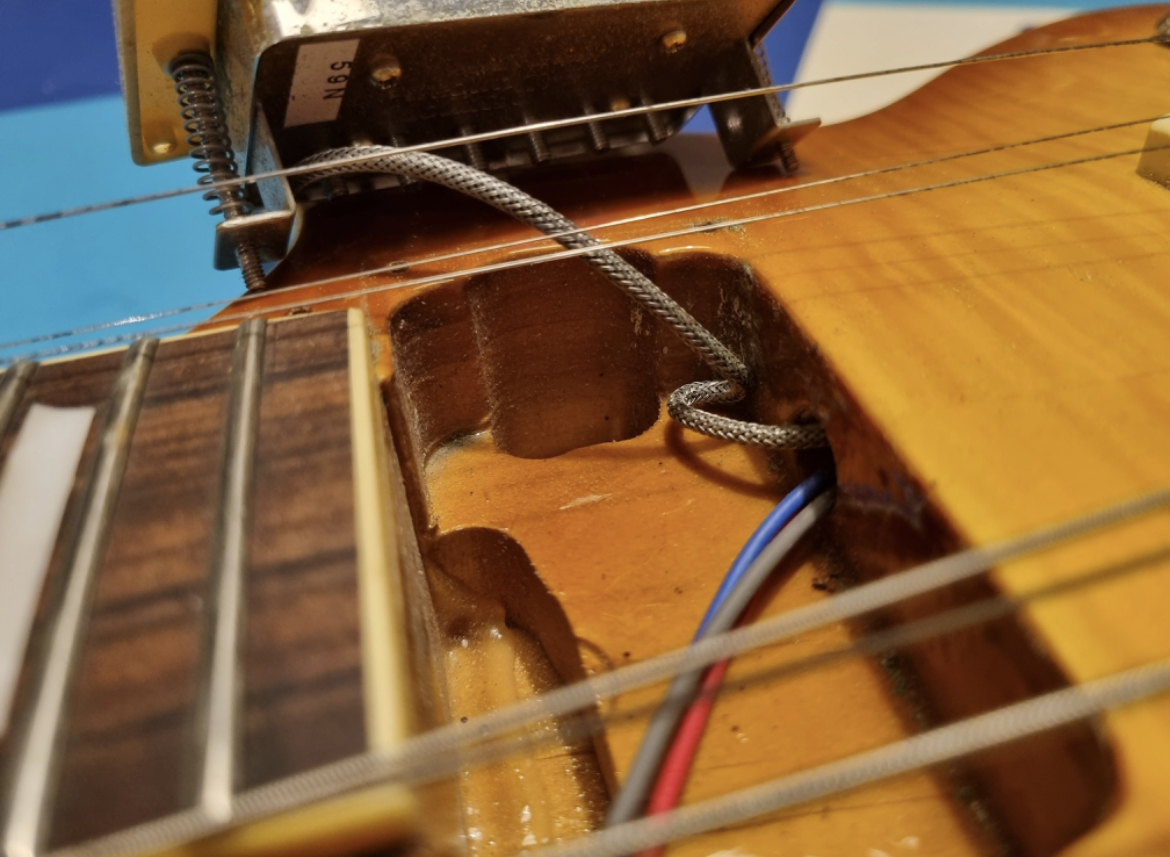 From reborn old's excellent 2013 thread on Korean Tokais. Might be informative.

I edited the format to make it easier to see. Content not changed.


Reborn Old said:
I'll be first to admit this is an ambitious post based largely on limited catalog info and on too few MIK example pics, but it's a start that hopefully other members can build on for dating and/or reference purposes, and hopefully help members who think they may be dealing with a fake.

No genuine MIK Tokai models have or had serial numbers outside of possibly 2006 Fine Corp "FC" or "F" prefix models if these were in fact produced in Korea and not China,

Certain MIK (made in Korea) attributes can help date your Love Rock within one of 4 production categories.

The main ones being TRC (truss rod cover) differences shown in the pic below and possibly a MIK headstock stamp after 2002.

If your MIK TRC doesn't look similar to one pictured below, you may be out of luck, but control cavity routes may help where a TRC has been replaced.

Most if not all Korean Tokais were designated for export purposes and have a center dimple headstock style.

All featured alder or laminate body and maple neck construction.

opaque plastic instead of pearloid found on most bolt-on neck models.

three screw arch shaped TRC
specs appear to be unchanged outside of introduction of "Made in Korea" ink stamp on headstock back sometime in 2003 or possibly 2004,

pic #4 (same as is MIJ ink stamp introduction on 2003 Japan models) until the end of documented MIK production. 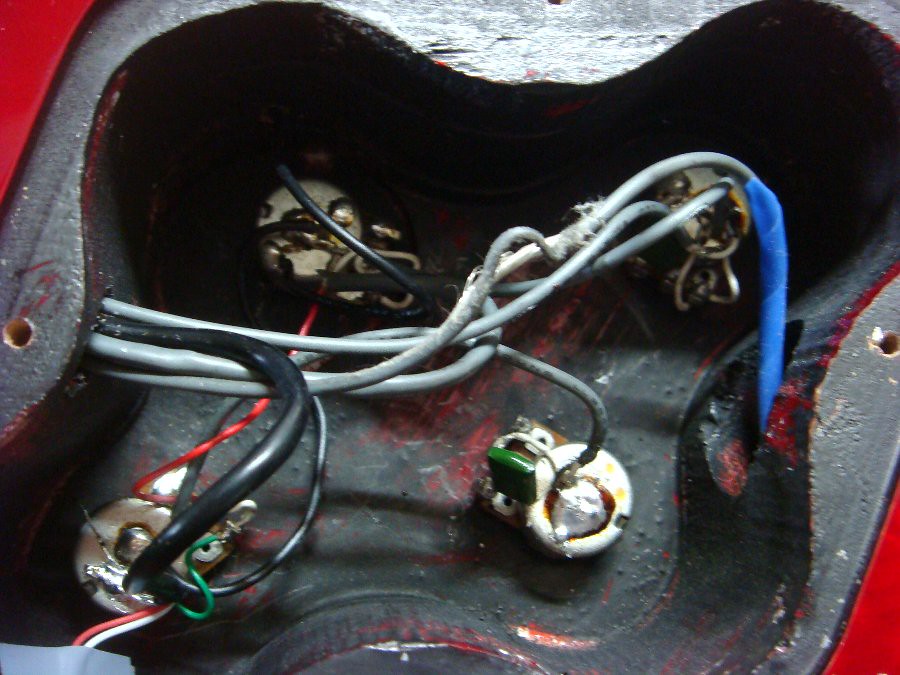 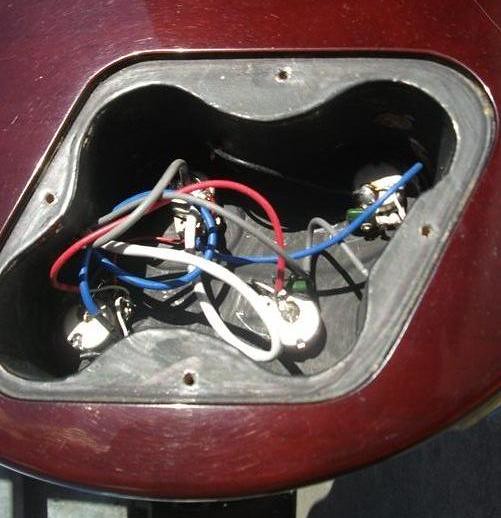 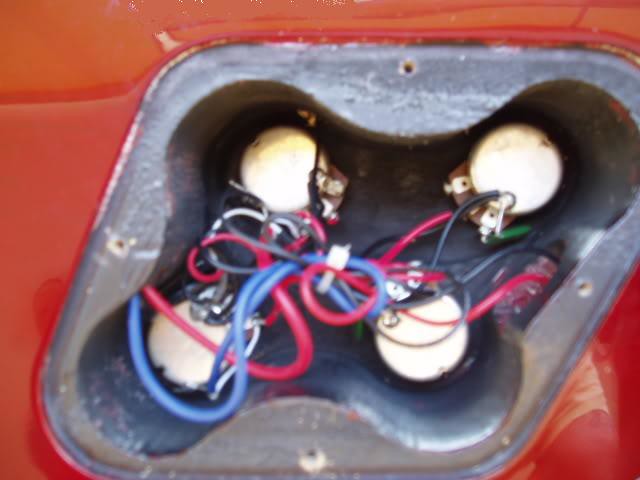 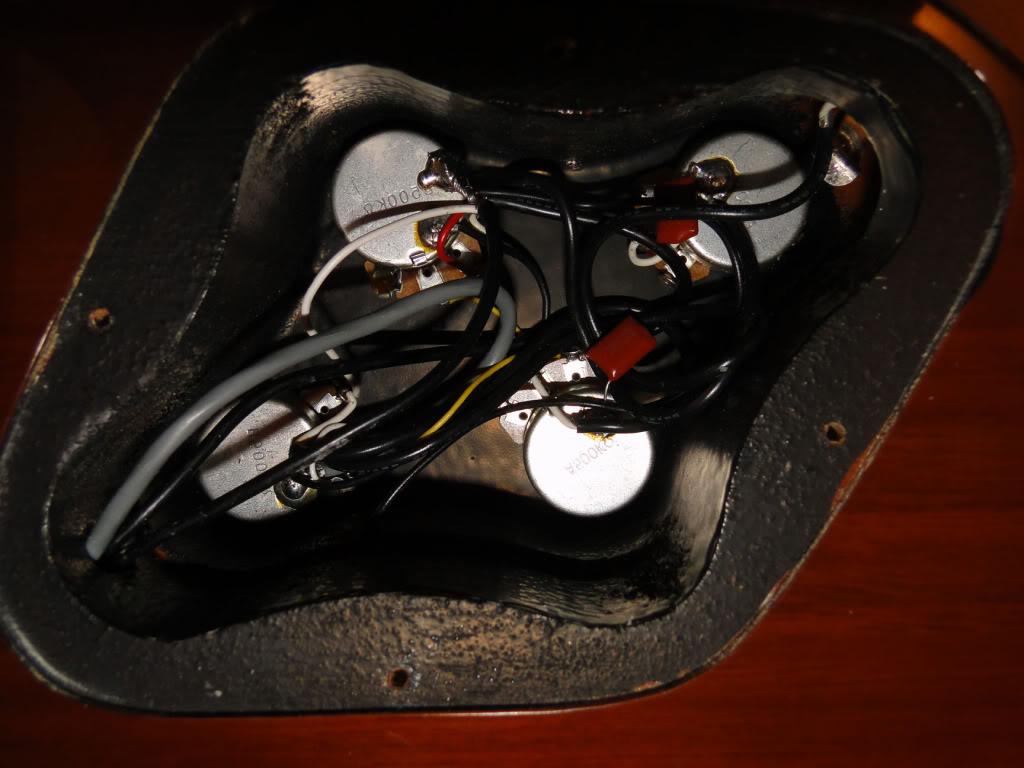 The Dillion cavity is different from others in that the cable channel and jack hole are at diagonal corner opposites (this pic was somehow flipped 180* on it's vertical axis), while Tokai ALS channels always route to the left side lobe and the jack hole is always in the right side lobe.

Arched TRC cavities have a flat routed right side lobe.

That flat is longer and follows route curvature, on the 2009 made in China example.

They share the same style of 4 screw bolt-on neck, same 3 screw pointed bell TRC, but were nevertheless produced in Japan.

External differences from MIK examples are mahogany neck and back construction instead of alder or laminate with maple necks. I believe most 1995-1999 MIJ bolt-on models have open book headstocks and necks aren't scarf jointed. I haven't found an export dimple MIJ headstock example of these yet.

Note that on these MIJ 1995-1999 bolt-on neck base models , the nut shape is sloped rather than rectangular in profile, and made of bone instead of plastic: 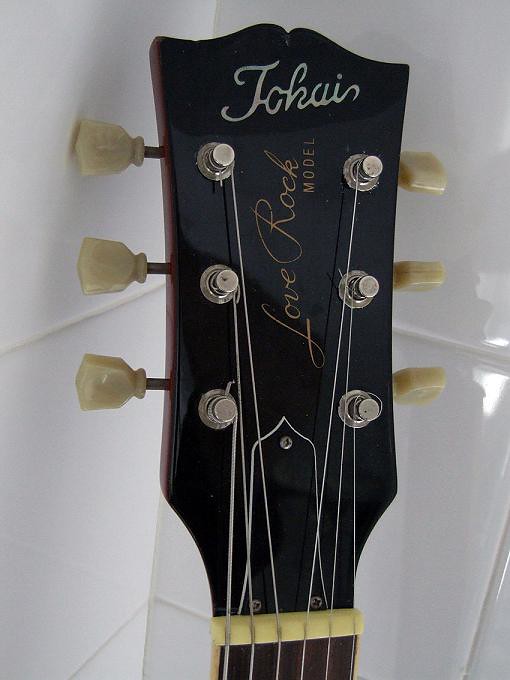 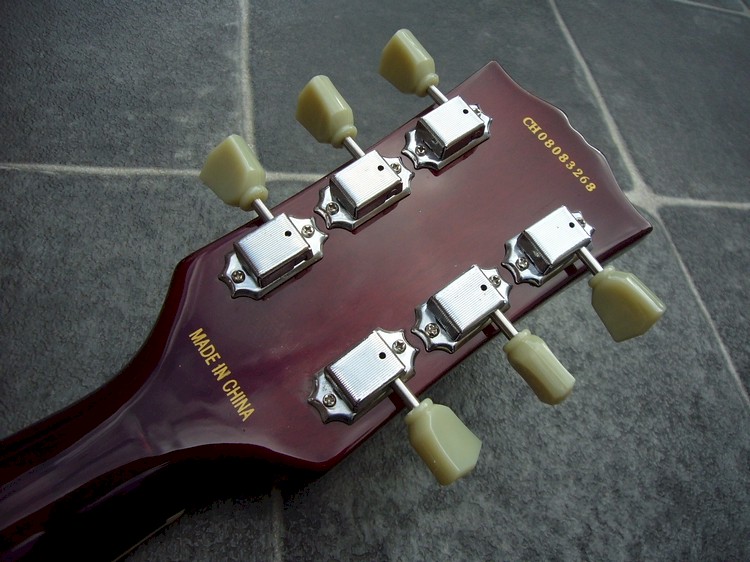 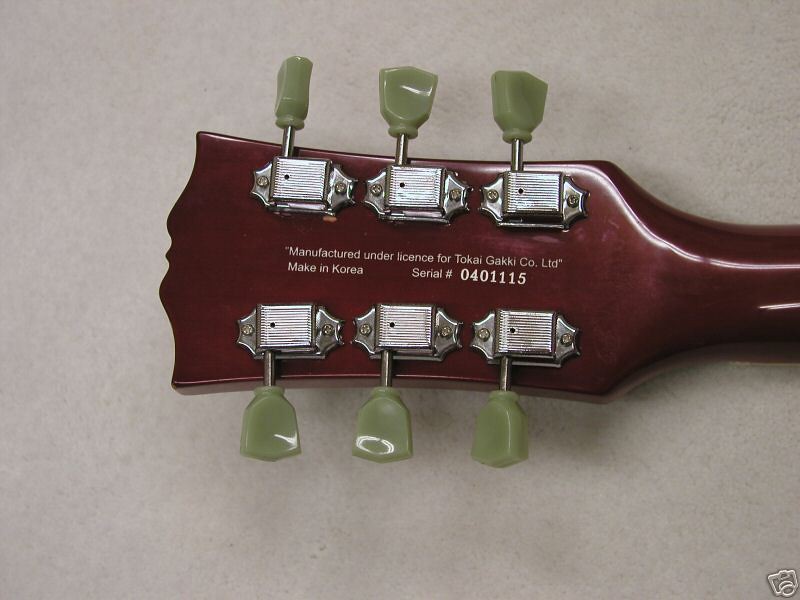 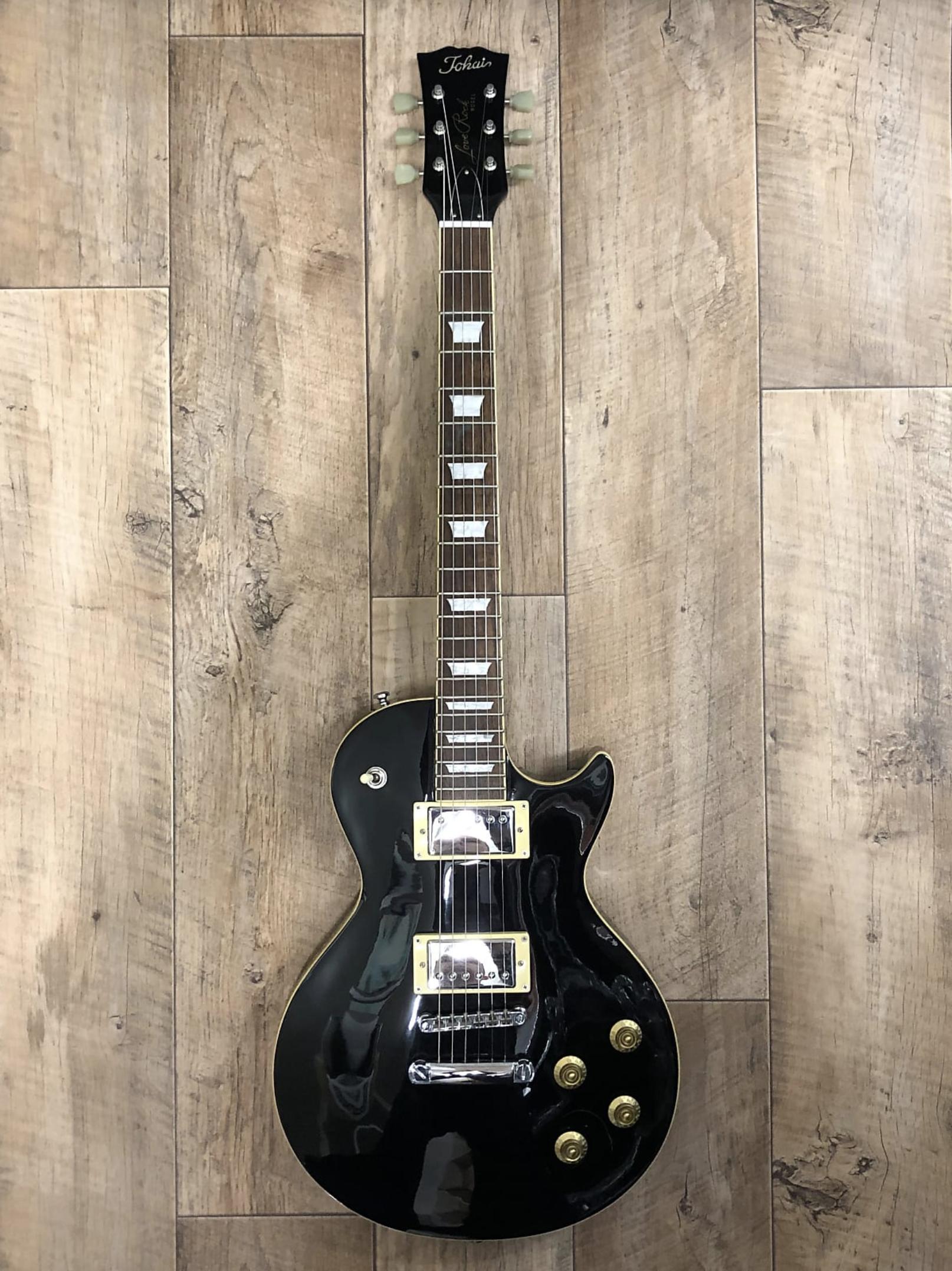 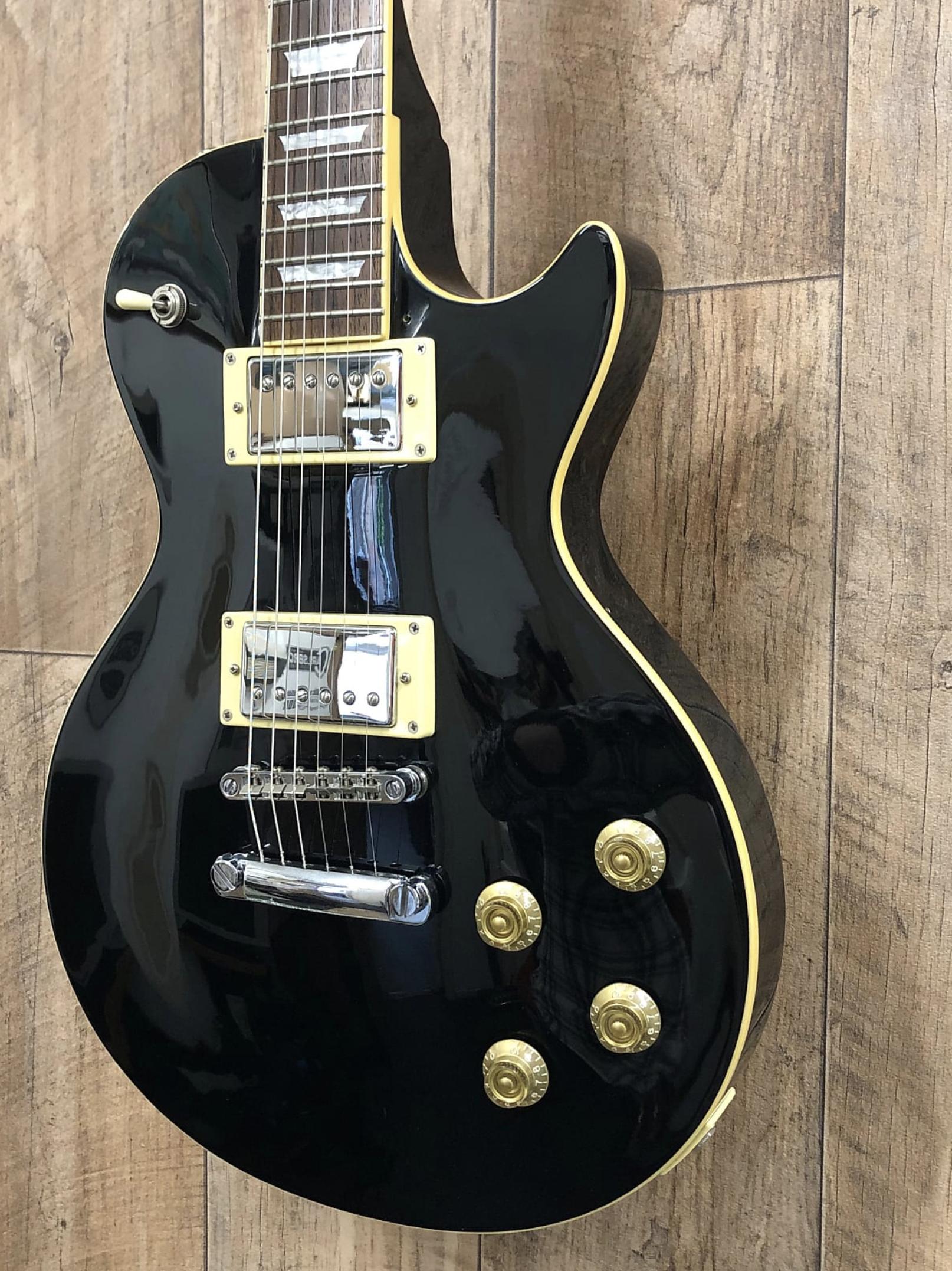 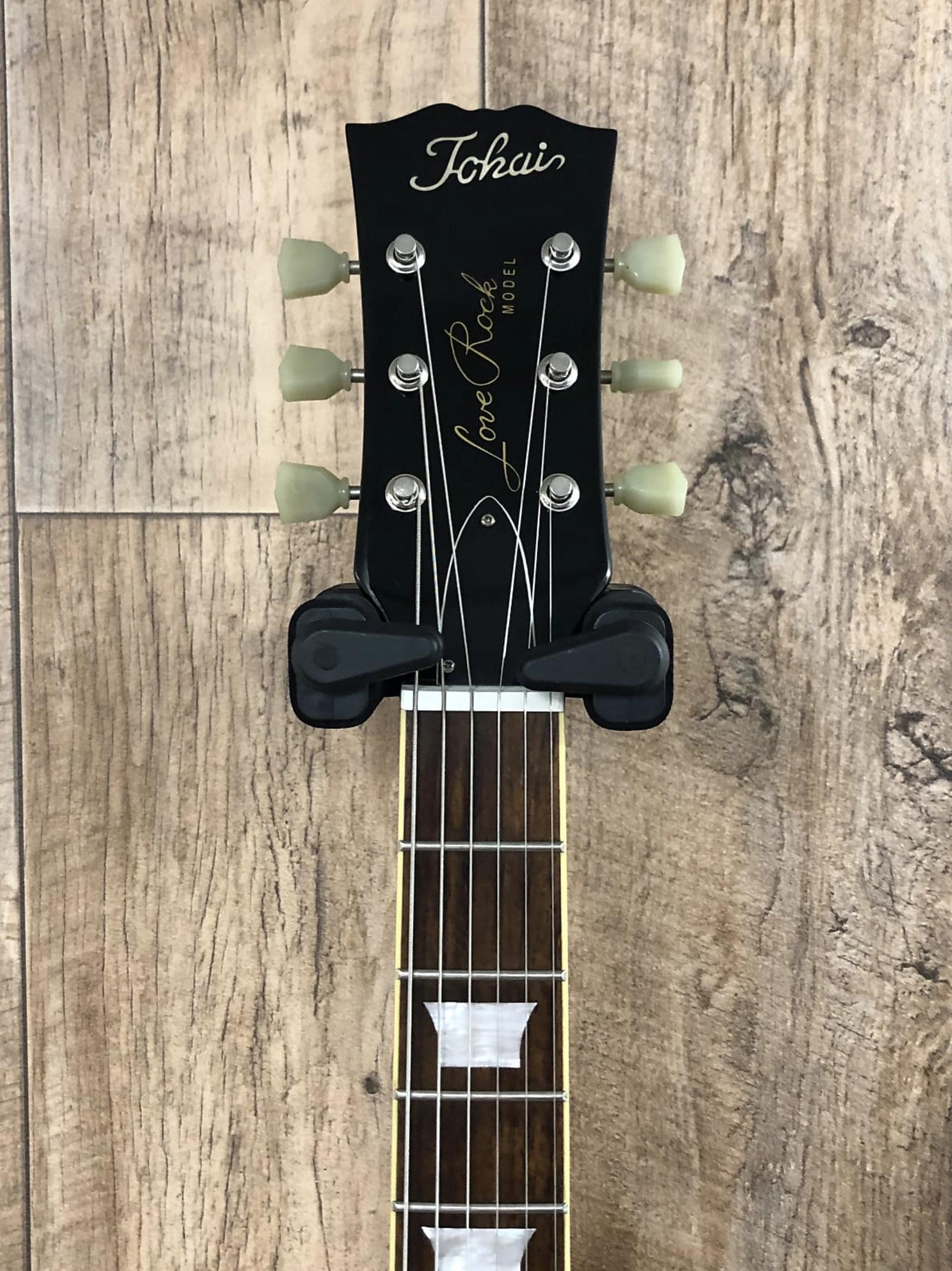 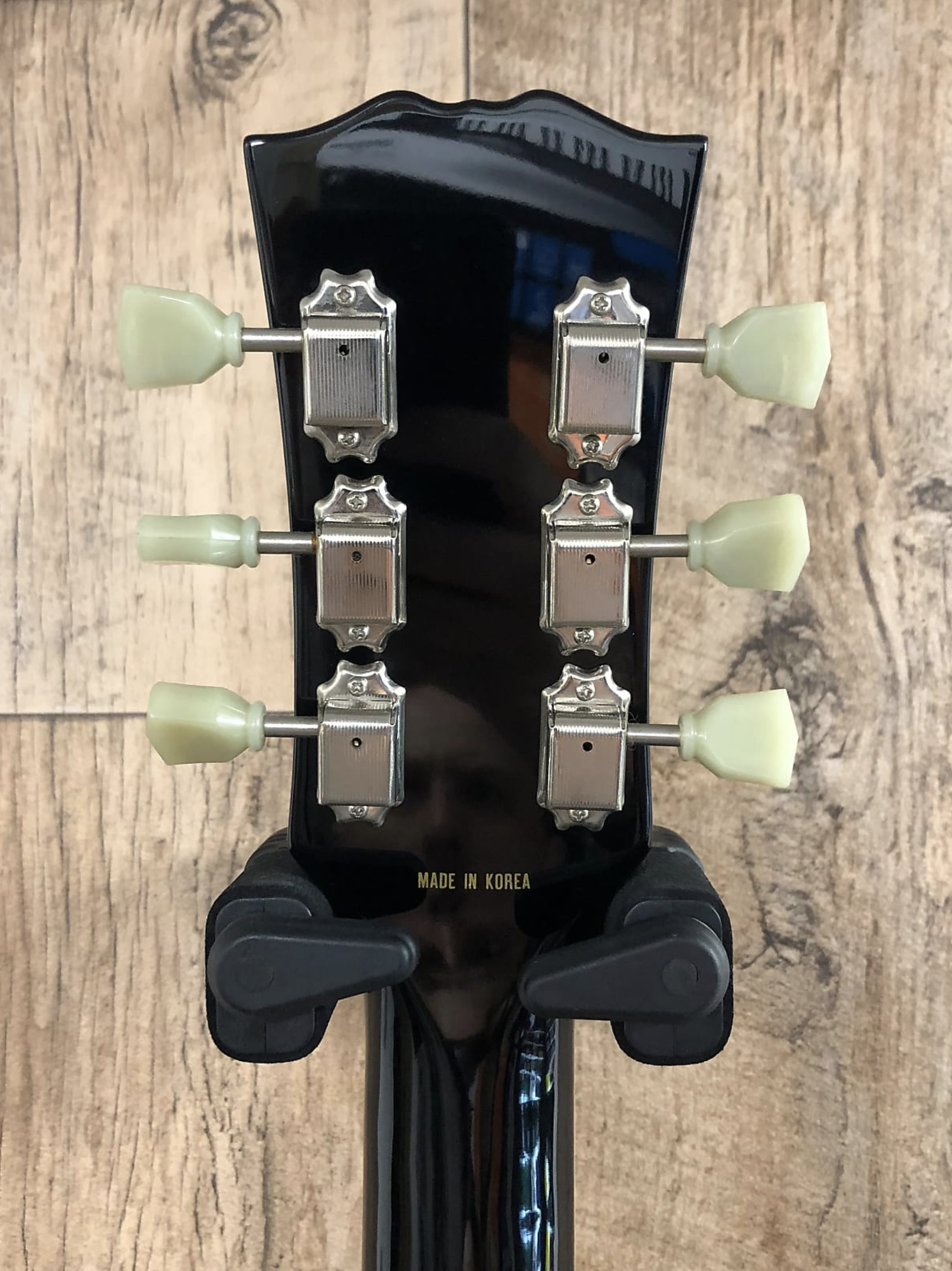 After seeing the 6 digit MIK ES60, I am starting to think these 6 digit guitars are Korean. Maybe the 7 and 8 too?

1 screw TRC on this one too, like the sunburst ES above. 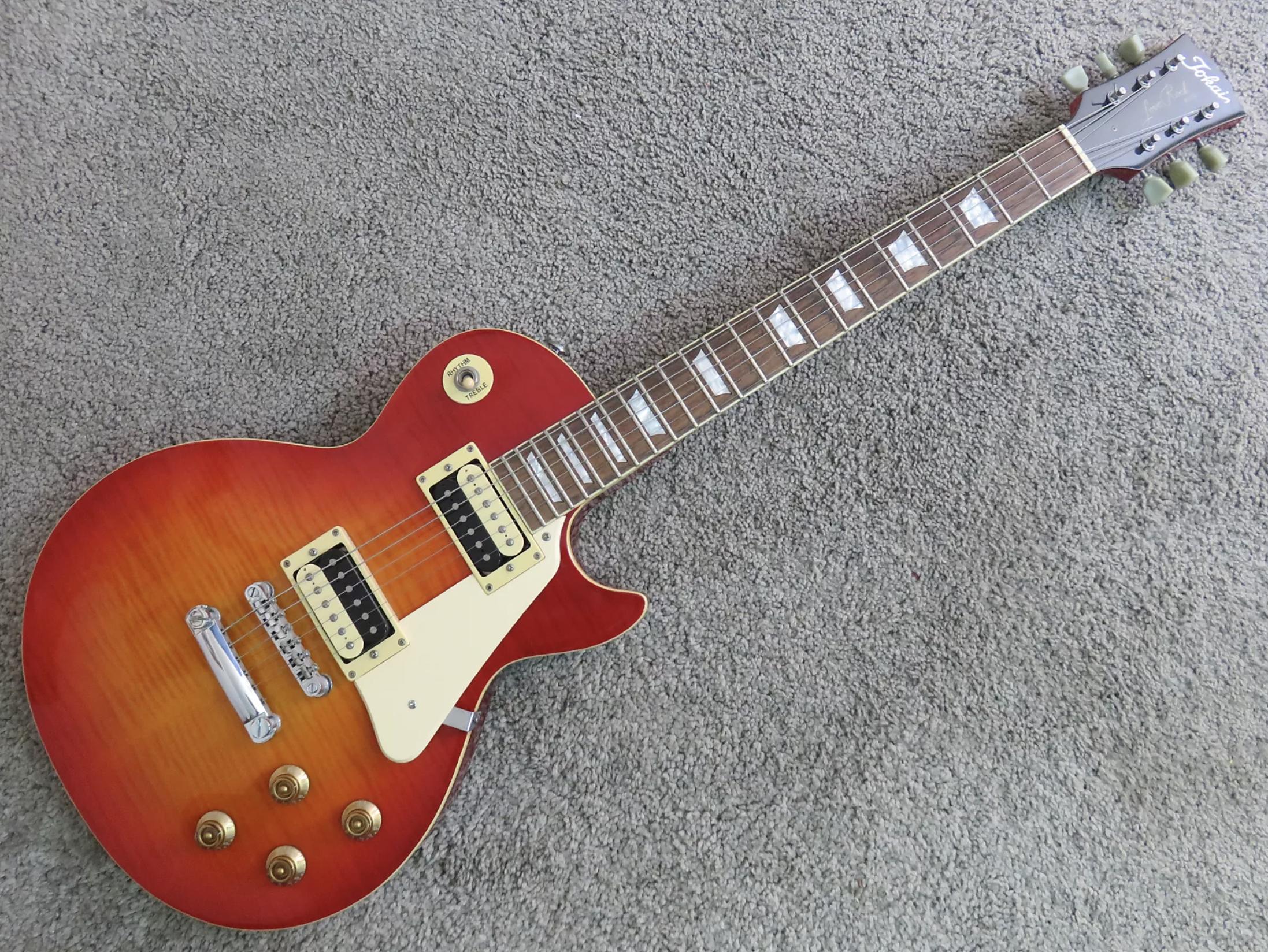 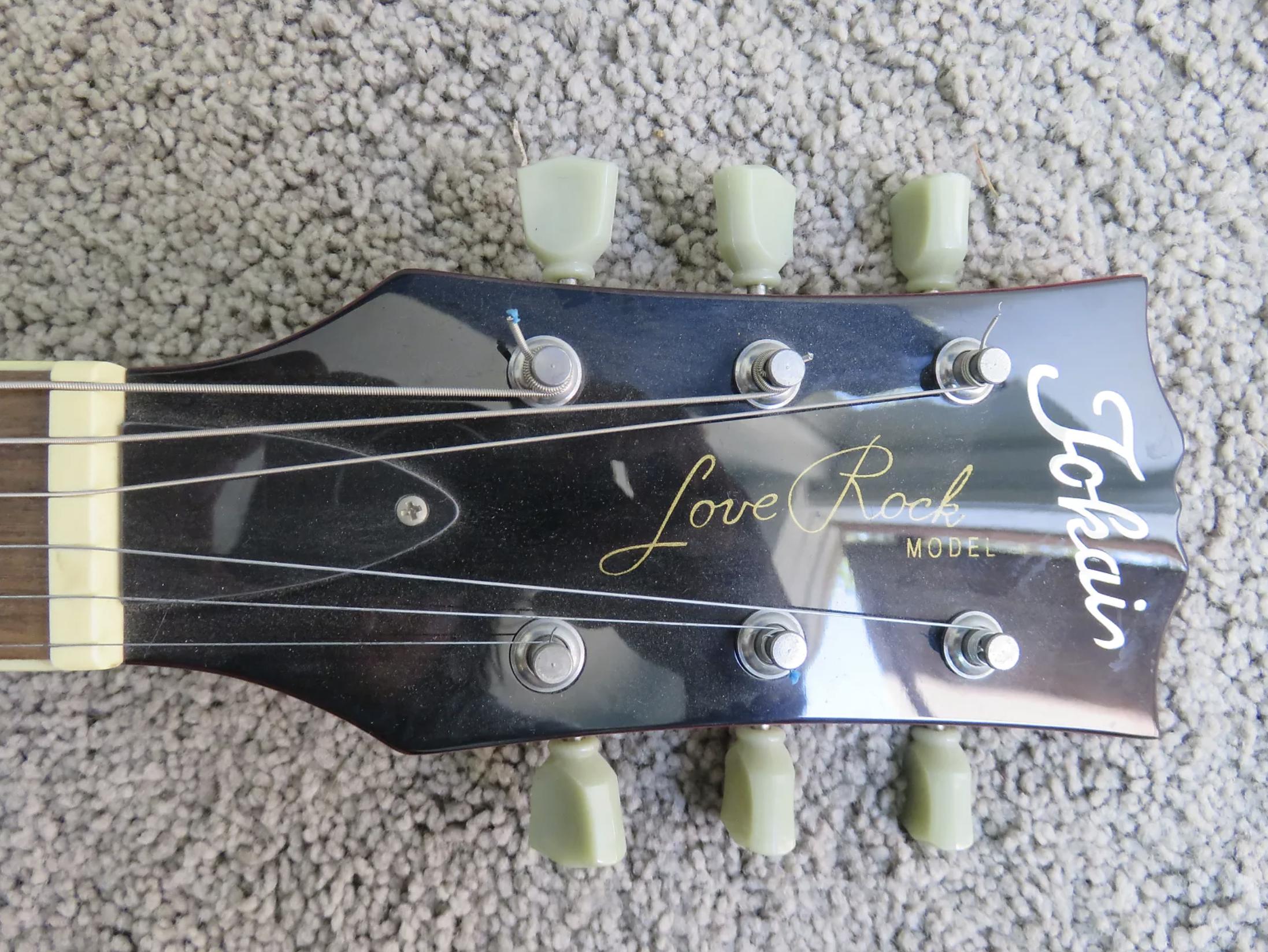 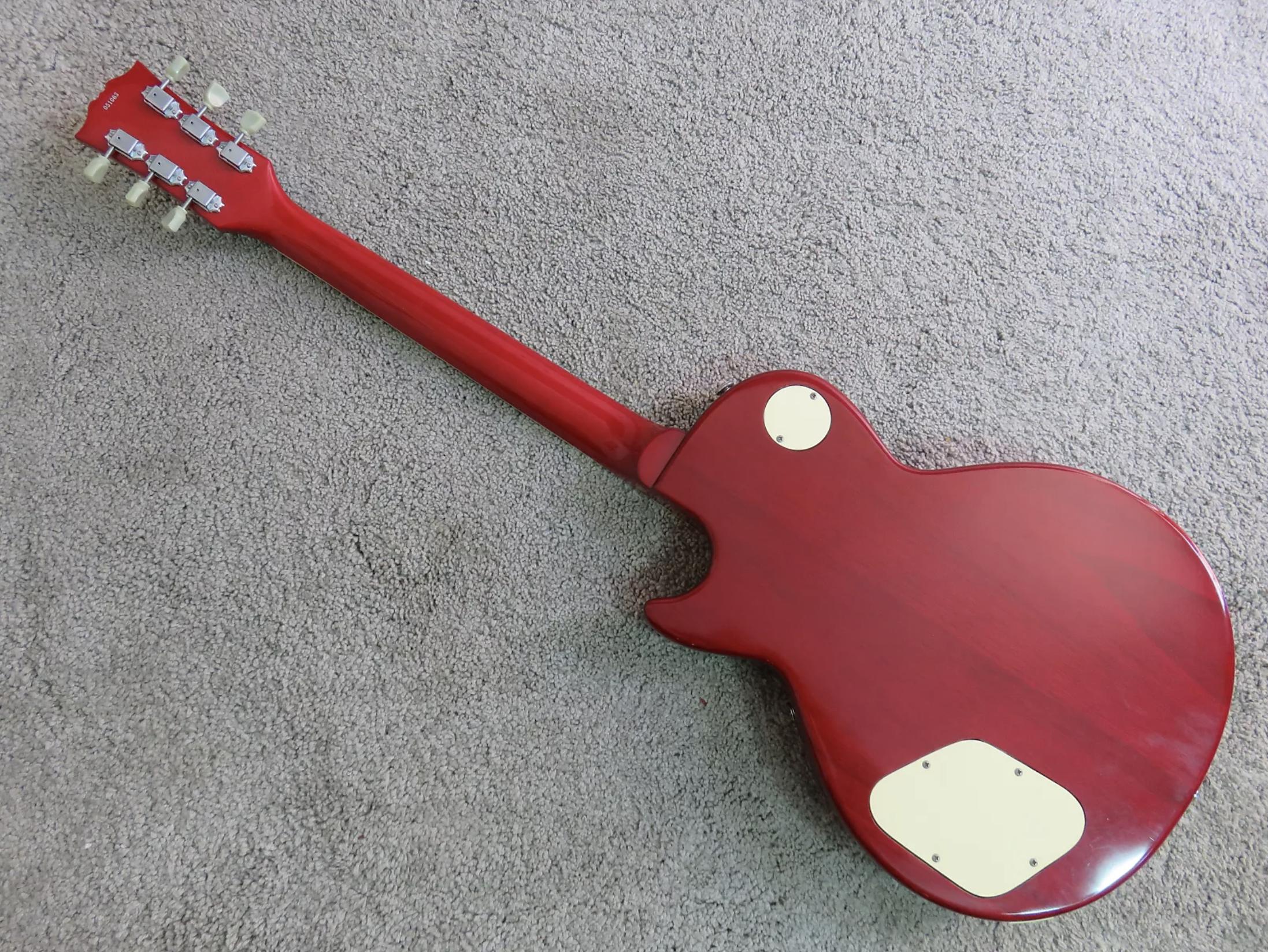 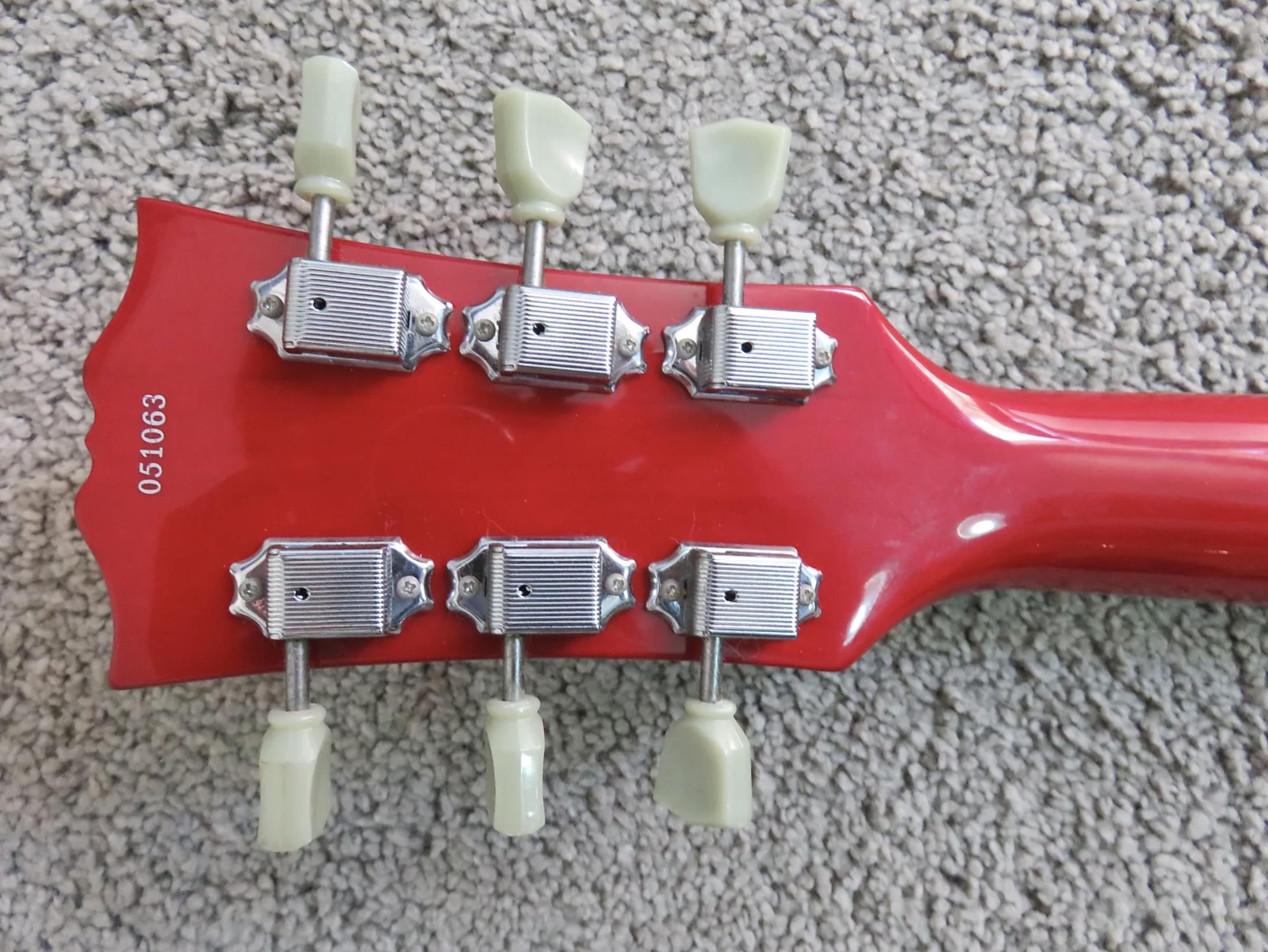 I think I found the source of your guitar...

There was a company called Active Music in Canada I believe. 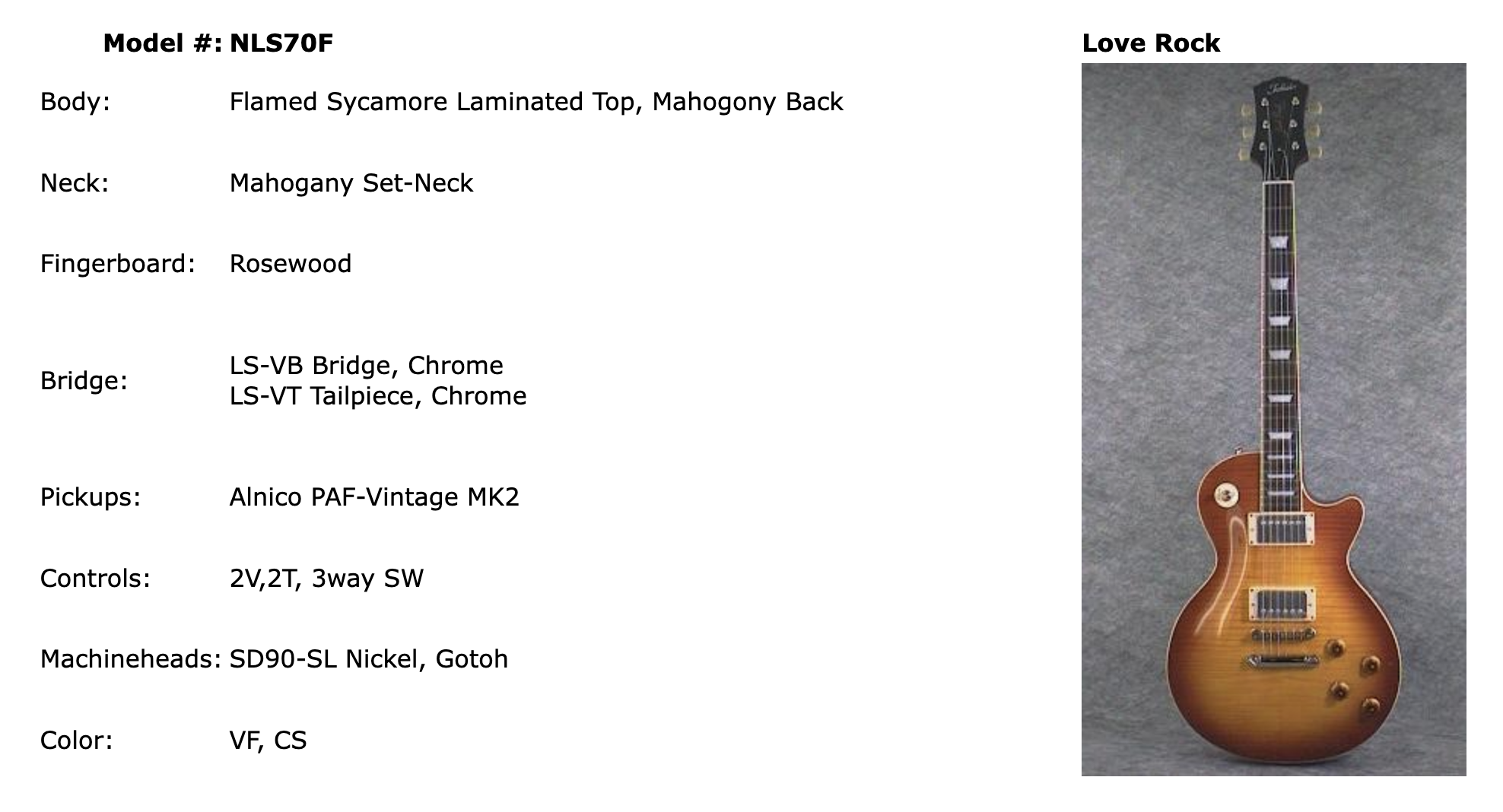 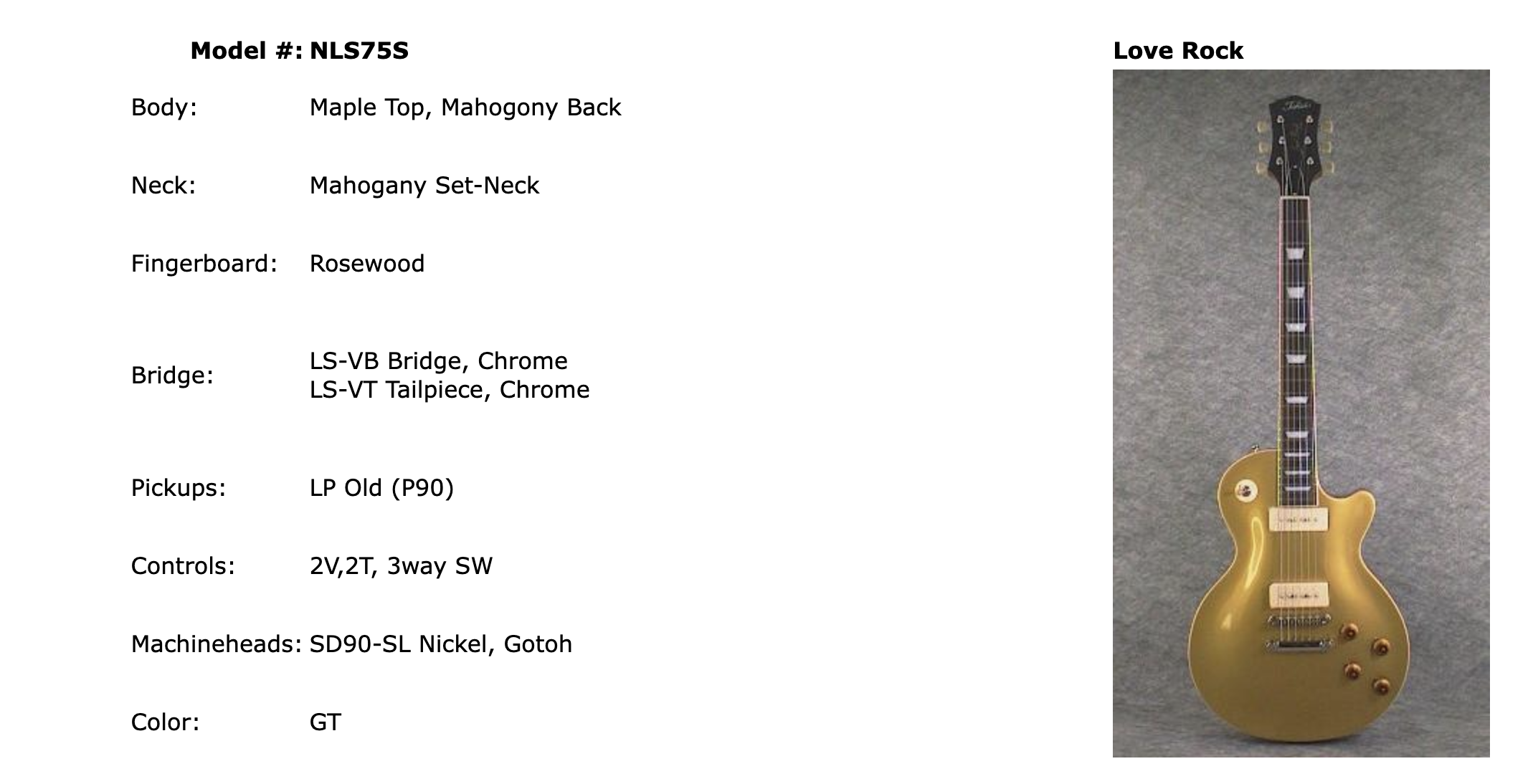 Made for the North American market. 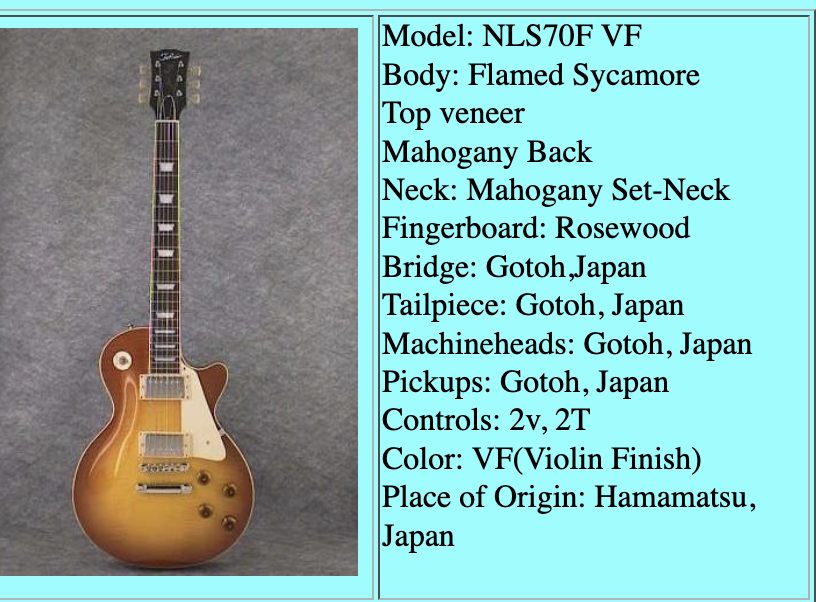 Z
Where was this made?

C
Need help with a Love Rock with no serial number