So I've well and truly got the Tokai bug now and I've just bought my fifth one! Only problem is I don't really know what I'm doing with regards to identifying them as fake or of the genuine country of origin etc.

I just picked up this 80's MIJ Goldstar sound on ebay for £450 which seamed reasonable (see photo links below hopefully). However, when it arrived I first noticed the decal looking a bit raised which began to concern me. I've opened her up and cannot honestly tell if the interior supports the claims it is a genuine MIJ Tokai. At present I still have a few days left to return this Goldstar if it might not be as advertised. Thanks in advance for any contributions.

Points in support of genuine -
Neck is great which compares well to my MIJ 80's Breezysound.
Bridge is FINAL PROSPEC which although I never heard of them previously I've read Tokai used some of these in the 80's.
Has markings on neck heel and pocket (although I don't understand these markings).

Points in support of fake -
Body looks a bit 'new' and I can't see any obvious markings in the body pick up cavities etc (although I can open her up again for another look).
'MADE IN JAPAN' neck sticker is ever so slightly trapped within the neck pocket, which suggests either the neck sticker was applied before bolting, or, the body has been replaced and the new body is slightly larger.

Many thanks again
Pete

(I'm way out of the loop on old Tokais and info on the details that has been pulled together on this forum over recent years) ... but, my first thought: I don't like the HSS cavity shape for an '80s Goldstar. Perhaps Tokai started doing generic cutouts to do vintage-style and 'superstrats' at some point in the late '80s?

FWIW, my old Springy (1983) had a similarly placed 'MADE IN JAPAN' sticker, with just a very slightly larger gap.
A

Also - unless I missed it, I didn't see a code and paint letter in the body cavity?

Check out this thread:

Sigmania said:
Check out this thread:

So the HSS cavity did appear in the '80s. Was this a slipstream change once Tokai decided to do some hotrodded strats, and they just used the same bodies for the SSS guitars?

They seem to be MIJ Tokais, but the jury is still out on when these were made. Some say 90s. Definitely 1985 or later.

It is likely a model towards lower end TST if those are ceramic pickups, but it does have Kluson style tuners. ST50 if original? 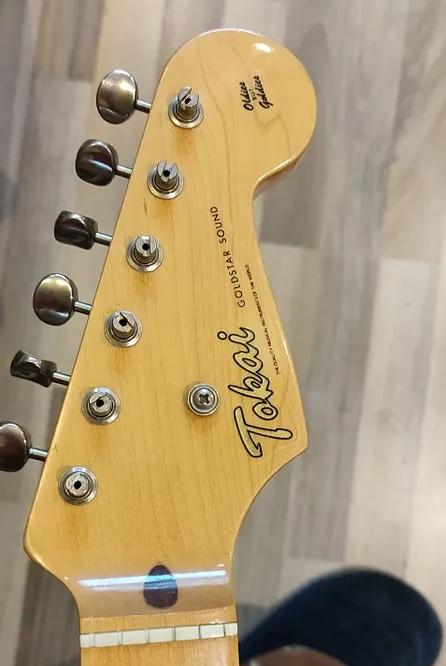 Curious how many pieces the body is and if those pickups have ceramic magnets?

Anyone know when the Final Prospec saddles and the brass ground plate disappeared? That would help date this one.

Final prospec disappeared post 85.
Blank Kluson is late 80's
6 digit would make it a 68 style. C neck?
Humbucker routing puts it late 80's at the earliest, it could also be a mixed marriage?

That all makes sense except the '68 style part. These 6 digit examples include maple neck small head (pre CBS style) guitars.

This is apparently a different numbering system.

See this other thread on 6 digit serial numbers.

Thanks for all your fascinating comments! Hopefully I too can expand my knowledge as I expand the collection! Anyway, apologies for the delay I've been waiting for a chance to get back under the hood and take more photos to see if I can find any more body markings.

Neck: mdvineng it appears to be a 'C', it feels incredible.

Body: other than the neck pocket biro pen signature I can't see anything else except what looks like a possible black painted letter 's' near to the biro pen mark, Although I could be clutching at straws.

Pickups: I can't be 100% certain but it seems they are Seymour Duncan Alnico II pro because the sticker codes have suggested so although I cannot find and exact match on SD website they are certainly close (sticker code APS-1 0288 / pickup stamps 'SD 2 06'). So I am hoping this further suggests the guitar was a legit MIJ Tokai as someone had the confidence to upgrade the pickups.

Can I ask your guys opinion if you feel it's most likely an original MIJ? And if not and it sounds like the body is the only real bit in any doubt would you personally keep this guitar if there is uncertainty around the body? I'm still within time to return it but if it's highly likely to be legit albeit someone at Tokai forgot to stamp the body then I'd prefer to keep it. However if I did come to sell it one day it would be nice to list it confidently as a MIJ with no ifs or buts!

Also it does seem odd that someone would replace the body unless it took a real whack.. The body finish does seem to match the TST range at a glance through the catalogue.

Anyway many thanks again, you guys are extremely helpful and I really appreciate the time you've taken to look at this.

It's definitely legit, just from an unusual period.

Looking like it's 1985ish ("Final Prospec" saddles + "minus sign" in production code on butt of the the neck brackets the date).

The countersunk holes in the neck pocket on the body are Tokai.

So it seems to be a Tokai neck and body with the HSS rout from that unusual period of production.

Here is a thread on other 6 digit Goldstars:

Hard to tell which model it is/price point. If the tuners are original that points to above an ST42, but I am not sure about the models in this period (after 1984). How many pieces is the body?

And thanks for posting.

Hope the upgraded pickups sound good. Guessing it might have had hot factory pickups originally, similar to "U"s?

Sigmania thats a fascinating thread and I see you've had quite a bit of input so I'm sure you know your potatoes! I guess part of the lure of Tokai's is this process of decoding and dating them, other than the fact they play incredibly of course.

The body on this one is definitely three piece, which isn't ideal but I hear it's more of an aesthetic difference more than an audible one. Does that offer any more clues?

The pickups are sounding very thin, especially bridge, I am hoping there's a wiring issue as the tone is playing in the bridge position, so somethings not quite right. Anyway it's no big deal, the SD's were an unexpected surprise so if one needs replacing I'm not gonna stress over it.

Out of interest I did spot that the Chinese website DH gate is now doing various fake Tokai's, which is a real shame and will no doubt make genuine authentication harder in the future. I really didn't think they'd bother copying smaller manufacturers such as Tokai and G&L but it seems now nothing is off the cards, and they're actively encouraging people to re-sell them in the west. Hopefully most people will still want a 'Chender' or 'Chibson' but you never know, some people will do anything for a buck.

Anyway, many thanks again fella's

You’re so welcome. And there have been fake Tokais made in China since at least 2004.

To add to the confusion, Tokai contracts to have lower end models made there. So China is a source of legit as well as fake Tokais.

Enjoy the guitar. I really don’t know much about these HSS versions other than the ones I’ve been able to find on line and on here. They are still a gray area for sure.
7

Ah that's interesting re the Chinese models, so it pays to be careful at least! I do have a legit and fairly recent Chinese Tokai 335 (cant remember the exact model) which i picked up on reverb a couple of years back for approx $200 and I have to say it plays exceptionally well and I'd say in terms of bang for your buck it's one of the best guitars I've got! Cheers mate

Cool. Yep, they make some great players for the price. 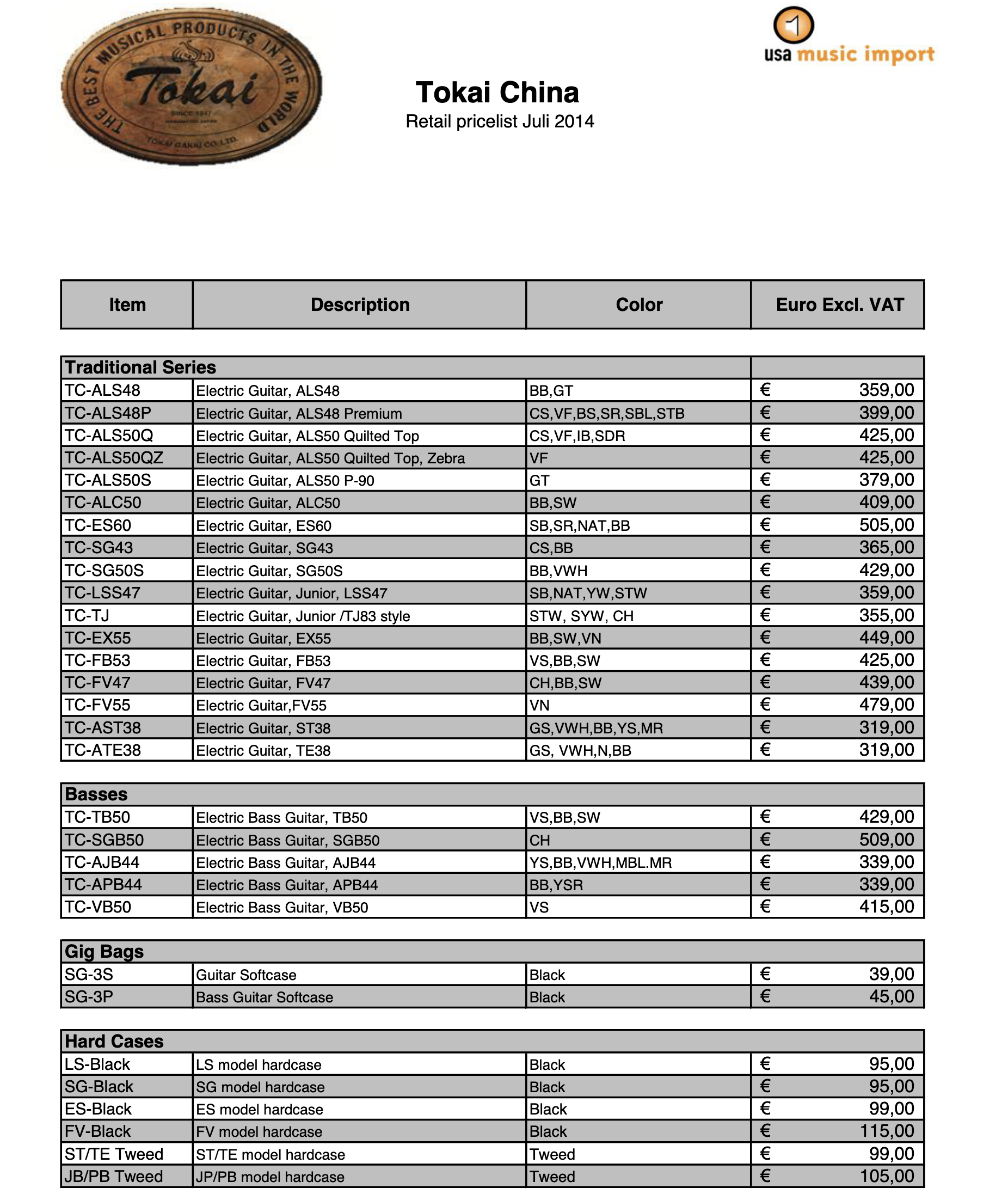 The stamp is April.

The pots changed around that time.

One of your pots is the kind that changed around then but I can't see it clearly.

The other two are ink stamped and come after the type we can date.

Could you possibly share detailed pics of your pots. especially the one that has engraved numbers?

That would be of tremendous help and value.

And those pickups were added later.

ROHS designation is 2003 or later. 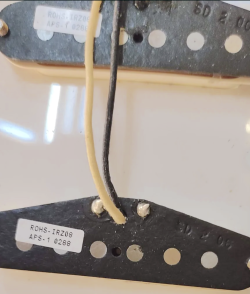