iainblack wrote:Francesco, here' your Inter guitar. It is a dark blue even though it looks black:

Iain, you should be making guitars for Gucci or Tiffany or some such. That's amazing work

@iain: i don't know why but all the 50th anniversary stratocaster were with 1 ply 11 screw pickguard also...
About mine we have to think that it's a '66 reissue, not a '62... i have to check on my books about that...
Anyway, cts pots, oak switch, alnico pick ups... alder body (as far as i know californian made like the neck...)... sounds great

Mirrorboy, thank you for the high praise however I cannot claim credit for this one. It is a custom made job I picked up in cash converters in Bolton. It has the Dimebag humbucker in the neck position and 2 other seymore duncan stacked / rail humbuckers in the other position, gold plated spretzel locking tuners, licensed gold floyd rose and fully copper shielded under the black metal scratchplate, it also has all sorts of ciol taps and pot switches so lots of sounds abound. It has a reverse jackson style headstock with no logo, two piece body etc. I tried to sell it at the Heydock guitar fair but no takers. I will have it on sale again at the Aintree guitar fayre on 25th November but if it does not sell I will probably break it down (sacralige I know!) but the parts should get me ?350 even though I'm selling it for less than that! Maybe '80s metal will come back in!

Francesco, do you mean '69 copy - a Hendrix buff will tell us the Isle of Wight model I'm sure. Also do you have to wear an afro wig and military tunic when playing it?

well, to be finicky, mine is a '67 copy actually with some incorrect detail.

The pickguard: according to Tony Bacon in 1965 the pickguard became 1 ply 11 screws for a (short??) period (CBS era, large headstock)

i never seen one. I recall that 11 screwed pickguard is a bit different starting from '65 because the up screw between neck and middle pick up return back near the middle single coil cover (like the '54-'59 era)... so who knows if there is around a '67 single plyed PG strat?

. The current copy has a different truss rod head (at the nut, not at the end of the neck) though. 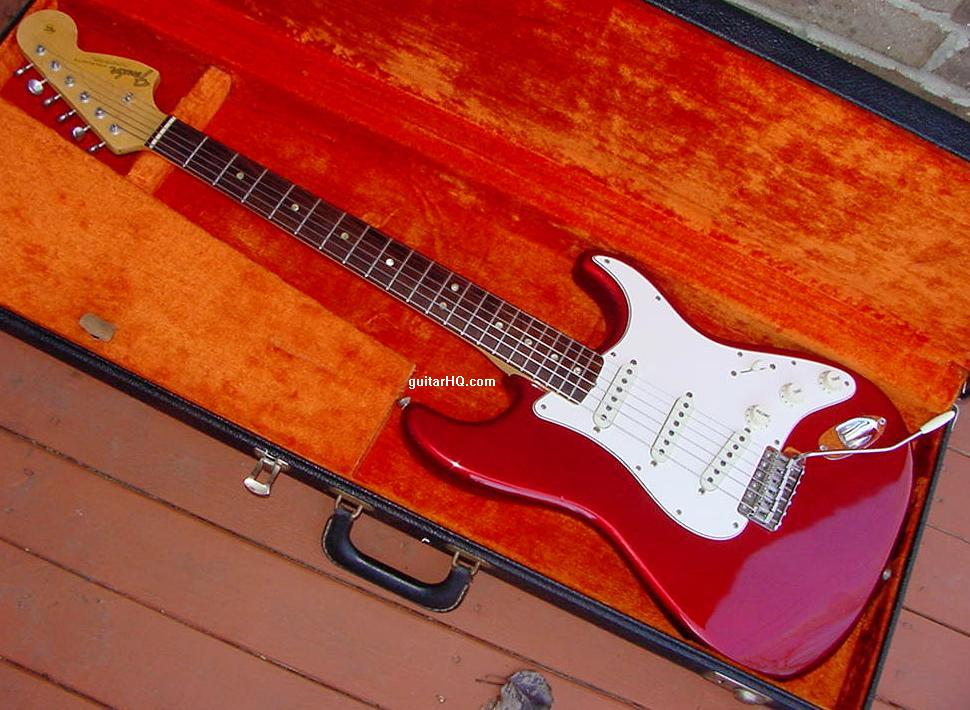 wow, i just realized that my strat has an original '77 Fender usa case...