by Dirty
I?m new here so first I will say Hello!

I just bought a Greco EG 800 lefty.
I haven?t recieved it yet.
What can you tell me about it?

Nitro cellulosa paint?
Fret edge binding?
How is the pickups?
Paid about 66,000 JPY is that a fair price?

by joukov
Why don't you ask the seller?
You should know all those things before buying the guitar.

Welcome to the forum.
by Dirty
I bought it from Ishibashi.
It was kind of a impulse buy. As a lefty you just have to grab the ones that shows up without thinking to much or else they?re gone before you blink! And as Ishibashi takes about 2-3 days to respond to e-mail I didn?t want to miss this one.

Thing is that I don?t have that much knowledge about the different models of Greco. I know I made a good deal with this buy but I was thinking I could get some aditional info here?

So, anyone knows if the EG800 has fret edge binding and nitro paint?
by japanstrat
From Villagers page

1980 and 1981 only.
Model EGF-850, EGF-1000, EGF-1200, all feature veneer flametops, fret binding and nitro finish, with a long tenon, the necks on these are of the fatter 59 kind.
As these were only produced for 2 years they are rare.
The rarest are the EGF-1200, the highest normal production model, and the ''built to order'' EGF-1800, which has a solid flametop, both of these models feature the fabled 'DRY Z' pickups, and are amongst the best regarded of all LP replicas.

The Greco Super Reals have the fattest neck of all the LP replica's.

Greco re-issued the Super Real series in 1988 and 1989 for a few High End Semi-Acoustic models only.


All these guitars feature a long neck tenon, currently only available in the Gibson Historic Series.
by Dirty
Thanks for the info!
by Dirty
The guitar arrived today.

Pleasent surprise I must say!
Every original item was included. Softcase, cable, info papers, tools.
The guitar itself looked like it has spent it?s time, since birth, on a shelf.
Talk about N.O.S.
Not a scratches, no fret wear, apears totaly unplayed.

Soo much guitar for 718 $ incl. shiping from Japan to Sweden.

Regards / A very happy "Dirty"
by japanstrat
If you take the neck pickup out and there are wooden dowels in the tenon then it's 1980.
by pimphat
Nice guitar. Here's it's right-handed brother!

my 1980 model.
Also has the features you mention as well as the "dowel and tennon" neck joint. This guitar actually blows away my old 94'Gibson LP Classic. Just plays sounds and feels much better than the three gibsons i've owned over the years. Congrats on a nice guitar!

by japanstrat
The dowel tenon was used because in the 70s Gibson was using the same tenon joint without the dowels before Gibson went to the short tenon.
The dowels just give added neck to body joint strength and strength is what a tenon and mortise joint is all about not all that long tenon sustain mojo BS that guitarists rave on about.
Only guitarists could attach sustain mojo BS to a well known carpentry joint that's been used for centuries.
To a Carpenter it's just a tenon and mortise joint and no big deal.
The original Gibson long tenon is just another way to get a strong neck joint.
If you read Les Paul interviews he likes a strong neck joint and he didn't really like the SG because he thought the neck joint was weak so the long tenon neck joint was used on the original Les Pauls because of Les Pauls preference for strong neck joints and it was not used to increase sustain or any of that BS.
I've never read anyone say that a neck volute results in increased sustain because of the added neck wood mass but some people rave on about a tiny piece of wood in their pickup cavity (long tenon) giving their guitar more sustain.
Getting back to the Grecos a company named Kanda Shokai owns the Greco brand name and they hire guitar designers and tell them generally what guitars they want designed then the guitar designer goes to the R&D department of FujiGen or Matsumoku or Dyna and draws up detailed plans of the guitar models just like architects do with buildings then FujiGen or Matsumoku or Dyna build the guitars from the guitar designers plans.
Fernandes/Burny used the Matsumoku R&D department where they designed Fernandes and Burnys http://www.daeschler.com/articles/fujigen/ .
So the Greco tenon and dowel joint was designed by a Japanese guitar designer for Kanda Shokai and it was based on the early 70s Gibson tenon designs.
Around 1981/1982 the Greco guitar designers working for Kanda Shokai changed the tenon design to a long tenon design like the 50s Gibsons probably because it's easier to do then the tenon dowel joint and is a strong joint as well and so FujiGen and Dyna built them with long tenons from 1981/1982 onward.
by Dirty

japanstrat wrote:If you take the neck pickup out and there are wooden dowels in the tenon then it's 1980.

I changed the pickups today and there was two dowels in the joint.
So I have a 80?s EG-800.

I second you on that long tenon mumbo jumbo "japanstrat"
Can?t make any difference in sustain.

Man I love this guitar, and the pickups from a 50?s Gibson custom shop made it over the top !!!!!

Cheers and thanks for some great help/info! 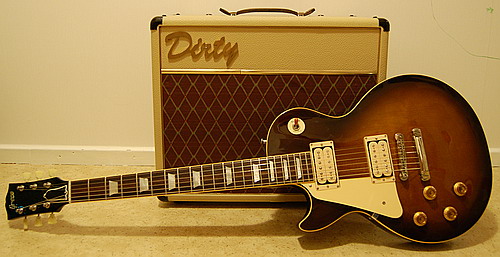 by DNS
It's actually more to it than the length;

by leadguitar_323
Nothing wrong with having an opinion but if you know anything about woodwork, bigger join means more contact and if there is more contact there is better transfer of vibration, so if there is better transfer of vibration that surely is more beneficial to the way a guitar is supposed to work..!!
Remember this site is for educating the uneducated about these wonderful guitars so it would be appropriate when making statements like "long tenon BS" you follow that with "IMHO"....

Mick
by bart
Sorry, but it does not look like there is contact all the way in the lower image. Shouldn't the tolerances have to be extreme for it to have any effect, contact over the whole surface.
by leadguitar_323
That little bit of contact at the end has very little bearing on it , it is the bottom and sides that are most important. Look at the gibson standard one at the bottom it is more of a rocker joint so they can get the neck angle right and it doesn't even mate up to the pickup cavity and its end is rounded so there is very little real contact, and as someone else pointed out , gibson shim there necks so they don't fit very well at all, that robs them of tone. The vibrations travel from the bottom up so it is more important to have good contact and more contact on the bottom of the neck joint, thats why the "slab bodied gibsons built in the seventies were highly criticized, the slab joins stopped the vibrations traveling through the guitars.