by Joe
Hi all,

as I wrote in the modding-thread, I wanted a burst and with big thanks to Ian and supernout I got it.

As I said in my last posting with the ES on ebay (hope that I did not offend someone here - I was just a bit angry what some guys tell in those descriptions on ebay - new LS75 with solid flame or laquer and so on) I wanted first to take a nice pic and here it is: 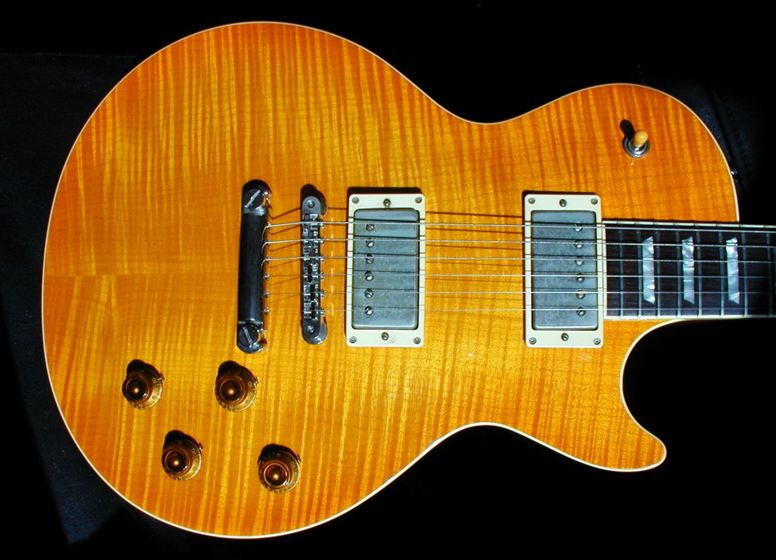 It's a LS 320, a very, very fine guitar. She's so good, that I even don't want one of those historic reissue gibbos.

Here's a pic with her 2 Tokai sisters: 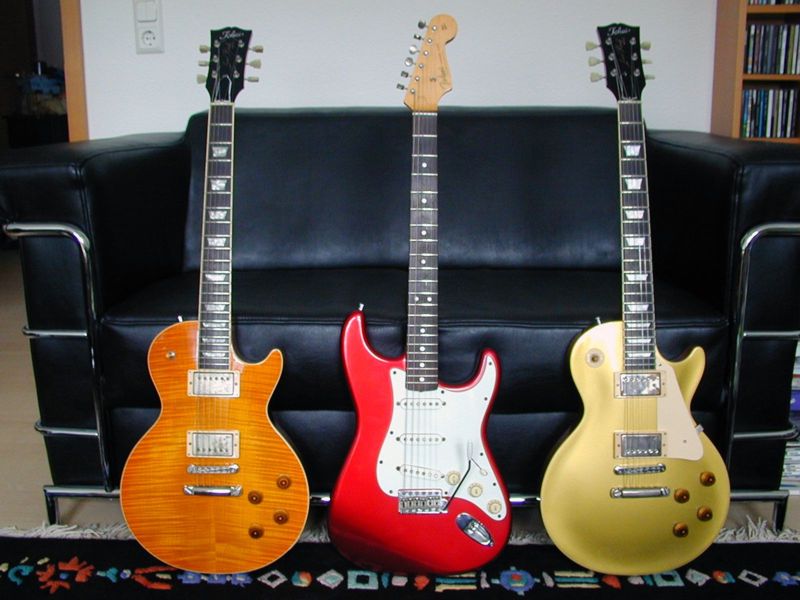 All I did after a few rehearsals with the band was changing the PUs with the Goldtop, Goldie got the Seth Lover SH55 and the 320 got the Antiquities, where I did the Peter Green Mod. And she got a new trc.

! I?m surprised Supernout let that one go lol! But just wondering about the pup swap, does it mean you didn?t really like the Seth Lovers in the 320?

Obviously the 320 is a pretty expensive guitar, & it clearly impressed you enough to part with a big bunch of Euros, but apart from the pup differences how do you rate the 320 against your Goldtop?

Ps:- I don?t seem to be getting anywhere re. Paul Ruby. I think you should definitely try a PM to Adrian Socnik

This is an outstanding beauty!

Ian: But just wondering about the pup swap, does it mean you didn&#8217;t really like the Seth Lovers in the 320?

No, really like the Seth Lovers, these are great pickups (for me and my playing) and as far as I know, they are like the antiquities, but without the aging. They sound very similar. I don't know if the aging-thing really does something to the pups except for the look, there are a lot of people who say that a 50 years old pickup is magnetically the same as a new one. But there were 2 reasons for me to change them anyway, first the aged look compliments the 320 imho better and my antiquities do have a tick less output compared to the Seth Lovers and I like that. Soundwise the antiquities are a little bit more smoother in the highs and the lows are creamy, compared to the Seth Lovers they are a bit more throaty. Even our drummer said, that he liked them more.

I would say that soundwise the difference is not so big. It could be, that someday I change them back.

Ian: Obviously the 320 is a pretty expensive guitar, & it clearly impressed you enough to part with a big bunch of Euros, but apart from the pup differences how do you rate the 320 against your Goldtop?

Argh, I was scary about that, could I just ignore it?

That's a delicate question for me because I like my Goldie so much, I wanted a second (i.e. another) Paul, not a better one to replace her. My Goldtop is/was the perfect Paul for me, a featherweight and very resonant. Over the years I played a lot of gibbos that can't reach her.

For the 320: beautiful workmanship. First the 320 is similar in feel and weight, it has a slightly fatter neck. I'd say it has more tone, is more complex sounding, the sustain is even longer. I don't want to say that this is the better guitar but I think I have to. The 320 gives you more possibilities to form your tone, that way, that you hit a note and then start modulating it. It's easier to express yourself, with the way you dig into the strings, letting her whisper or scream.

To say the least: I'm stunned.

Joe
PS: wrote Adrian a mail on monday no response till now
All times are UTC-06:00
Page 1 of 1
Powered by phpBB® Forum Software © phpBB Limited
https://www.phpbb.com/