tokai, positive or negative in your country?

tokai, positive or negative in your country?

in your country, tokai has a positive reputation or negative reputation since tokai makes many gibson/fender copies? in japan, tokai always has been known for the fine craftmanship and near exact copies/replicas of gibson/fender plus the tokai quality originals. i havent heard anything bad about tokai basically and they are very much well respected. so, how about your country? tokai cool? or uncool? hopefully very cool in everywhere!
QUALITY THAN QUANTITY!
Top

At that time the Tokais were showing up first in the EU, almost everyone was still thinking "Made in Japan = cheap knockoff guitars" and only Ibanez and Yamaha had gained some "originality credits" (with still a whiff of "knockoff" image). Almost nobody knew about the JDM at that time, or what wonders it had to offer. Then some raving reviews in guitar magazines educated people about the attention to detail and quality of the Tokai guitars that the originals lacked at that time and I remember reading those with a mix of disbelief, sheer amazement and GAS. Mind you, what was showing up in German music stores at that time (apart from Ibanez' and Yamaha's well-accepted own designs) were indeed just lower-grade "bargain" copies popular with importers of all kinds, most of them at best downgraded versions of some JDM models, usually branded with some rather obscure names. The Tokais really stuck out of that, but I think nobody really understood what they were representing.

Another factor is that availability in Germany was pretty bad as opposed by the UK, which (AFAIK) got more or less spammed with Tokais. But either way, the vast majority of them were lower-grade models so apart from the cheeky headstock decals they didn't seem to be that that much different from other offers, and many people had no idea that there were higher-grade models in first place. So they were generally deemed "good" but most people didn't get to see how good a Tokai could be if the customer invested the extra money for a higher-grade model and Tokai's reputation was not quite what it should've been.

Only the internet really helped educating people about Tokai, the JDM in general, what development it went through since 1975 (mostly unnoticed by the rest of the world), and what Tokai (and many other Japanese guitar makers) actually did there. You still have to dig deep to understand the difference between true replica and knockoff guitars and you need to distinguish between the pricy models and what usually makes it to local shops, you have to learn how to tell MIJ guitars apart from MIC/MIK and that's all not what many people do - they tend to (over-)generalize things. So people in the know rate high-grade Tokai guitars high today but they usually also know that there are many, many competitors in Japan, today probably more than ever, so Tokai is only one of many options. However, since it was the first brand that really made it to the EU and US markets with the Japanese concept of true replica guitars, it has a certain ring to it.

In Belgium it is still somewhat of a niche brand, but last decade or so the recognition for their craftsmanship and quality seem to show a 'rising' trend.

Here in Canada it seems that Tokai is usually associated with Fakai's. There are real ones around too but no one has heard of them which makes me wonder why anyone here would fake an unknown brand ??

Most people here would rather pay $1600.00 for a Gibson Studio with a bad plek job and numerous QC issues just because it says Gibson.

They work for me.
Top

brokentoes wrote: ↑
Wed Nov 20, 2019 10:58 pm
Here in Canada it seems that Tokai is usually associated with Fakai's. There are real ones around too but no one has heard of them which makes me wonder why anyone here would fake an unknown brand ??

IIRC and AFAIK the odd Canadian "Fakai" story is a somewhat touchy issue in some forums (including this one), so let's not go there.

Just so much - anything with a certain "WANT!!"-factor has been faked and will be faked, in particular stuff that's not very well documented and relatively easy to fake. That there are Kokais and Chokais and all the special run and order made Tokais out there is not exactly making things more transparent. Every now and then I see "Fakais" on German platforms too, not to mention all the offers with a convenient error in the model designator or other lame attempts on squeezing a few bucks more out of the deal. That's why this forum is so important.

Sadly, this is obviously a global thing. According to this (apparently paid for by G.) article even in Japan:

If you check the U-BOX inventory, at least half of the guitars are MIA. Now this can mean a lot of things (for example "Japanese guitars are keepers, people try to get rid of the inferior stuff") but it's most likely indicative of sales anyway. It takes a lot of learning to assess the quality of a guitar properly and many people don't recognize quality if you hit them on the head with it. So they rather spend 4,000€ on e.g. a very mediocre "Teambuilt" Strat from the "Custom Shop" because they think they represent "higher quality", while they actually come with too wide neck pockets and at best standard fretjobs and were likely made from the same parts as the regular F. models. Sadly, even if they knew how much quality they could get for that kind of money elsewhere (not only in Japan), most of them would still buy the CS for the bragging rights and fake sense of individualism. 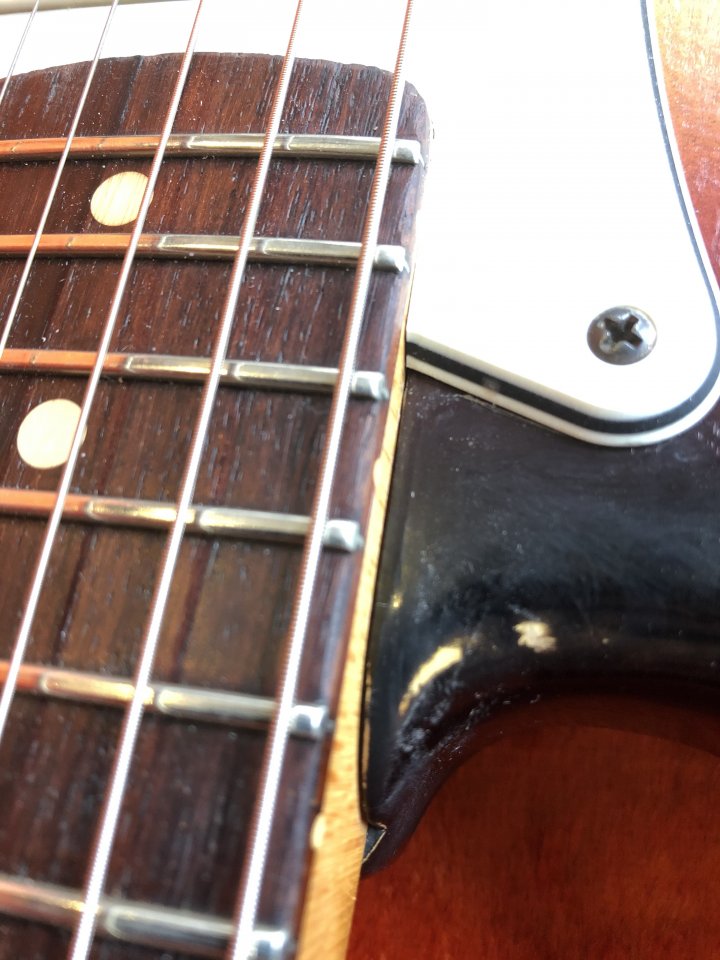 But BTT, maybe people have to be old enough to understand how Tokai changed the game as the visible spearhead of the Japanese replica guitar industry in the early 1980s. It sure left its marks on me - the guitar I described in this thread sparked my interest because back in the 80s a pic of this Tokai caused the worst fit of GAS ever for me:

Apparently I wasn't the only one who found this attractive, here's the full story on my favorite guitar related blog: Link

The only other guitar that looked like that back then was the Fender "Strat", our frontman had one of those in CAR and that was some awful guitar, heavy and full of problems. Of course I could never get a hold of a Tokai like that but I never forgot it. A more remarkable Tokai story is my "Jazz Sound" bass, which I played in one of my bands back then. One day we were the opener for another, better known band and after the gig, the bassman of the other band wanted to trade his brandnew 1300 Deutschmark Washburn S1000 "Status" bass for my 500DM Tokai. He didn't want any money on top, so we both left the place with a different bass, probably both thinking "sucker".

But that's how the hype about Tokai was in those days.
Top
Post Reply
6 posts • Page 1 of 1