Well, I went ahead and bought it. Photos below.

I already had a 2003 ES-120, which I decided to sell to make way for this ES-90. I know it sounds a bit silly, but I really wanted one with the 'right' headstock and truss rod cover. I hadn't had the 120 very long, but saw this one and couldn't resist.

It's been used a fair bit over the years by a gigging musician, but is in very good condition overall bar a few marks here and there. I do love a played-in instrument.

This appears to be a fairly rare guitar as there's hardly any info on it online. Plenty on 1980s ES100 guitars, and 2000s ES120s and up, but nothing really on the ES-90, so I'm going to attempt to describe it here.

It plays great. Very similar to the ES-120 I had overall. The neck has a nice taper, but isn't too thick. My ES-120 was of similar thickness at the first fret, but I'd say this is 9/10 of an inch at the 12th, whereas the 120 was probably a full inch (I haven't got callipers, so this won't be very accurate). I prefer the slightly shallower profile on the ES-90 as I find I can play with a bit of neck vibrato, which I wasn't really able to pull off on the 120.

The frets are medium.

Pretty sure the finish is poly.

Subtly flamed top, back and sides. Top and back have a seam in the centre, which according to some internet forums was quite rare on 60s 335s and is now sought-after (seems strange given that a one-piece looks better if we're honest).

Judging by the patina, the tuners and pickguard holder are nickel, whilst the pickup covers, bridge and tailpiece are chrome. Hardware looks to be Gotoh.

How does it compare to the ES-120? The main differences I can think of:
- It's much less flamey - although the photos below show a lot of flame, it's much more subtle in person. It looks more like the flame you sometimes see in 1960s Gibsons. The ES120 by comparison had very vivid flame, perhaps a bit too much for my taste, but still looked great. The ES-90 is centre-seamed top and back, the ES-120 was one piece top and back;
- No 'Made in Japan' text on back of neck on ES-90, the ES-120 has this;
- Slightly thinner neck at the 12th fret as described above;
- The 'right' headstock shape and truss rod cover, versus the dimple and Tokai TRC on the 120;
- It's lighter in weight than the 120. The 120 was already light at 7.5 lb, the ES-90 is the lightest 335 I've personally ever held at just over 7 lb;
- It's got a brighter, more open tone than the 120, with better picking dynamics. To my ears, the best 335s sound a bit like early 50s Telecasters, but 'bigger'. To me, the ES-90 has more of this than the ES-120 I had.

I've photographed the pickups below, has anyone seen these in a Tokai before? According to the 1990 catalogue, the ES-90 comes with PAF Vintage MK1.

I have had about 20+ guitars over the past 5 years or so. For me, this ranks as the nicest alongside a 52 reissue Telecaster I sold earlier this year.

Will I keep it? Who knows. I'm a notorious flipper of instruments. I'll play this one a while first though. 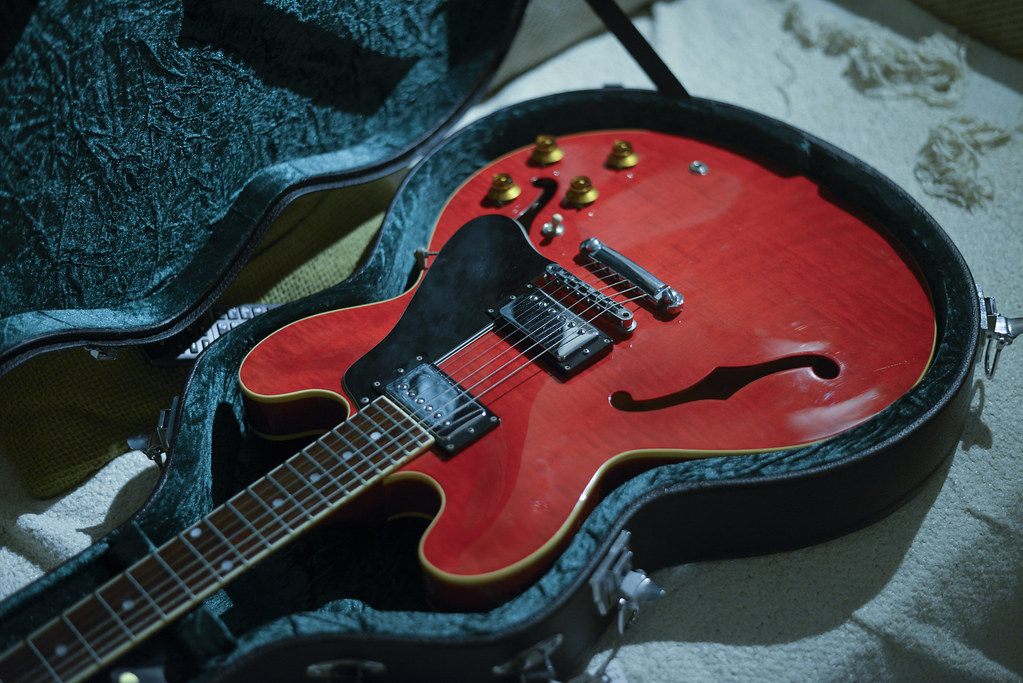 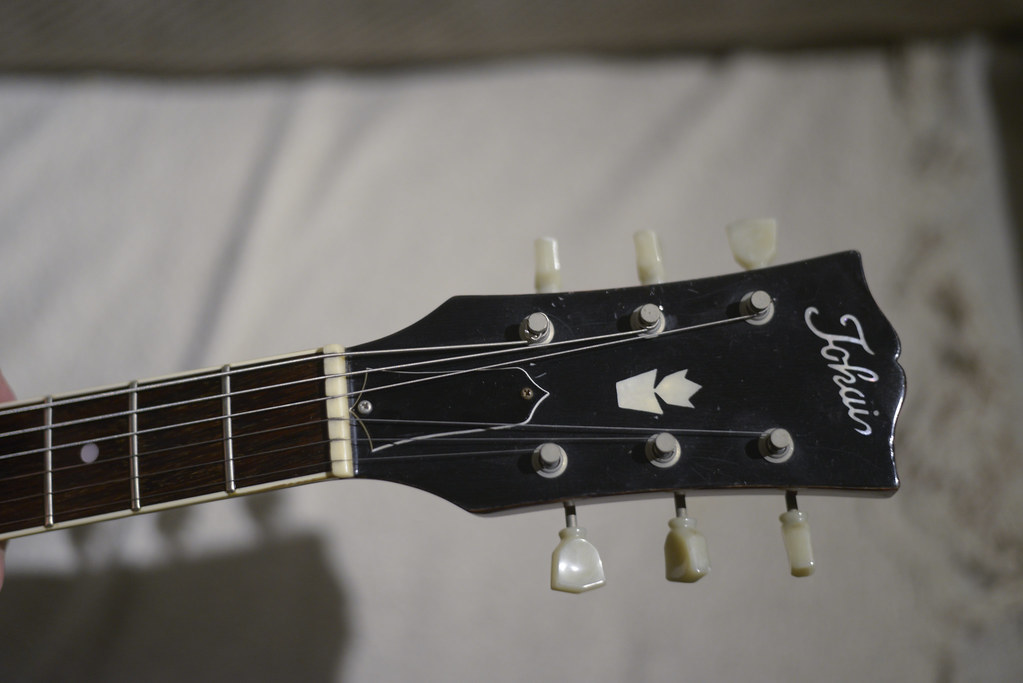 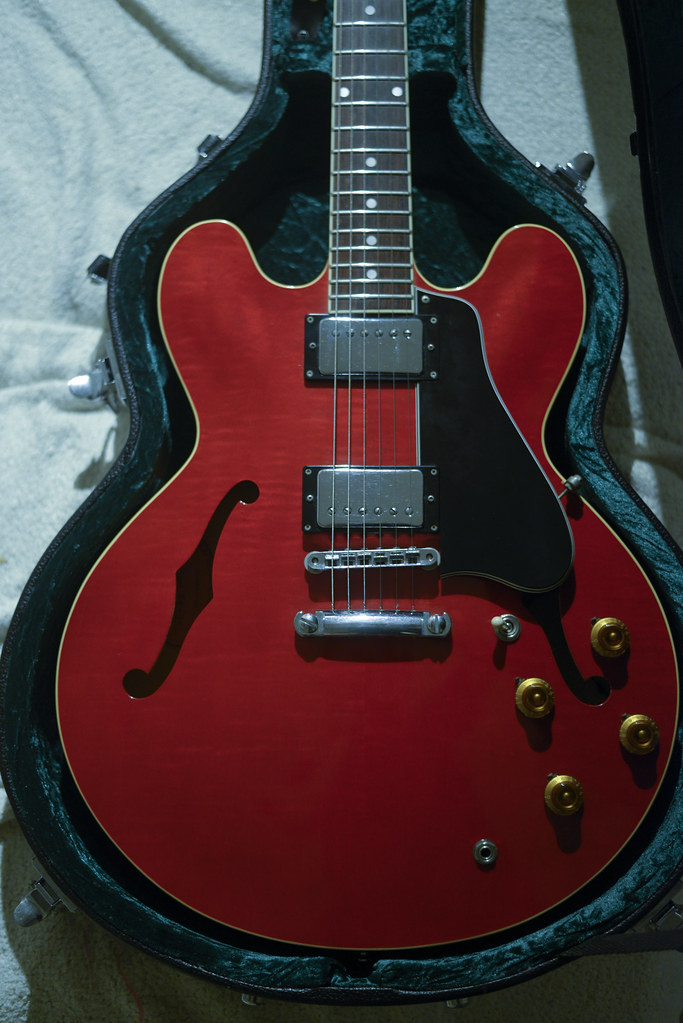 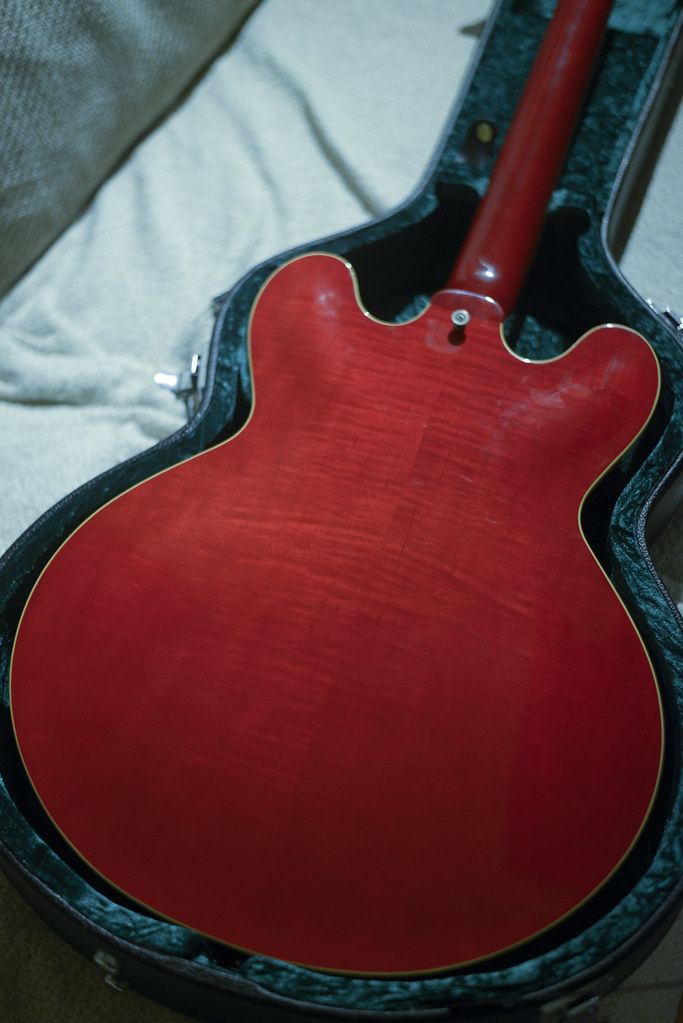 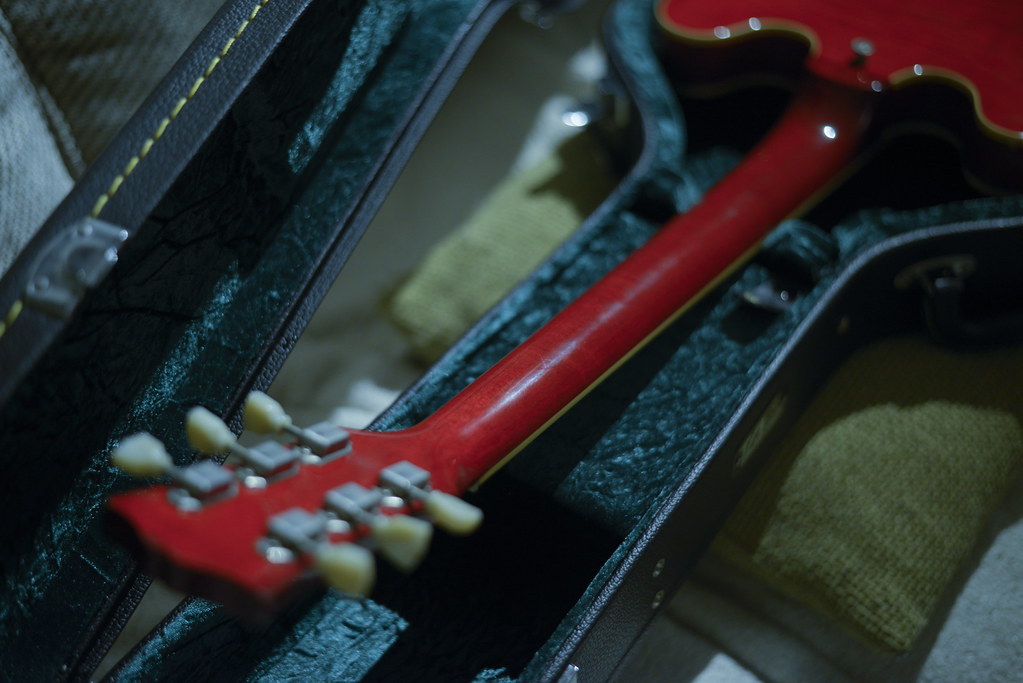 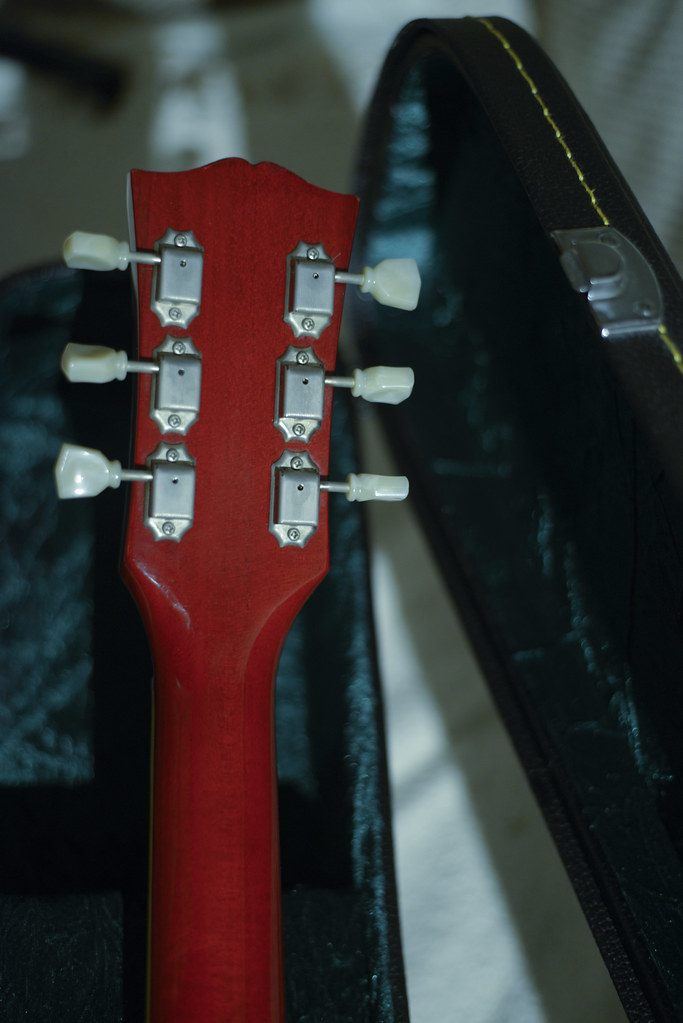 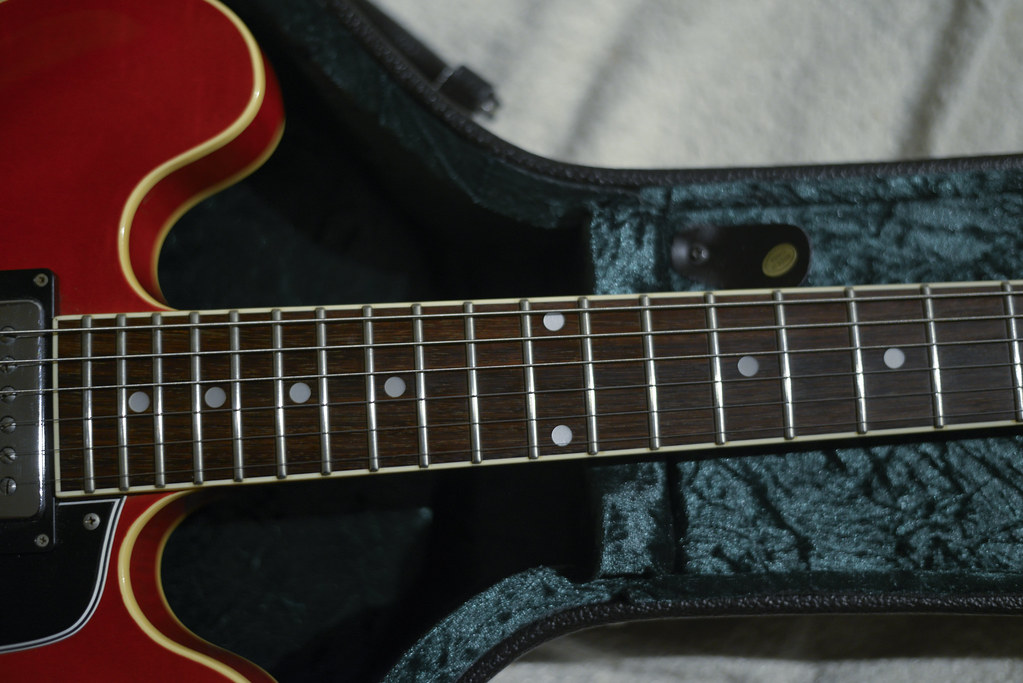 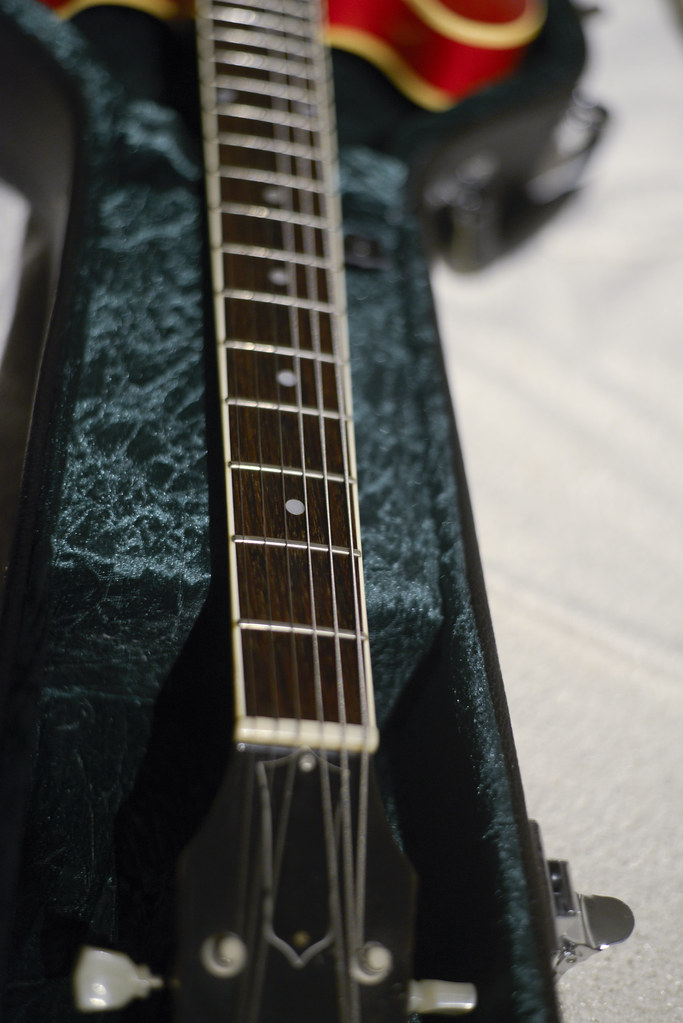 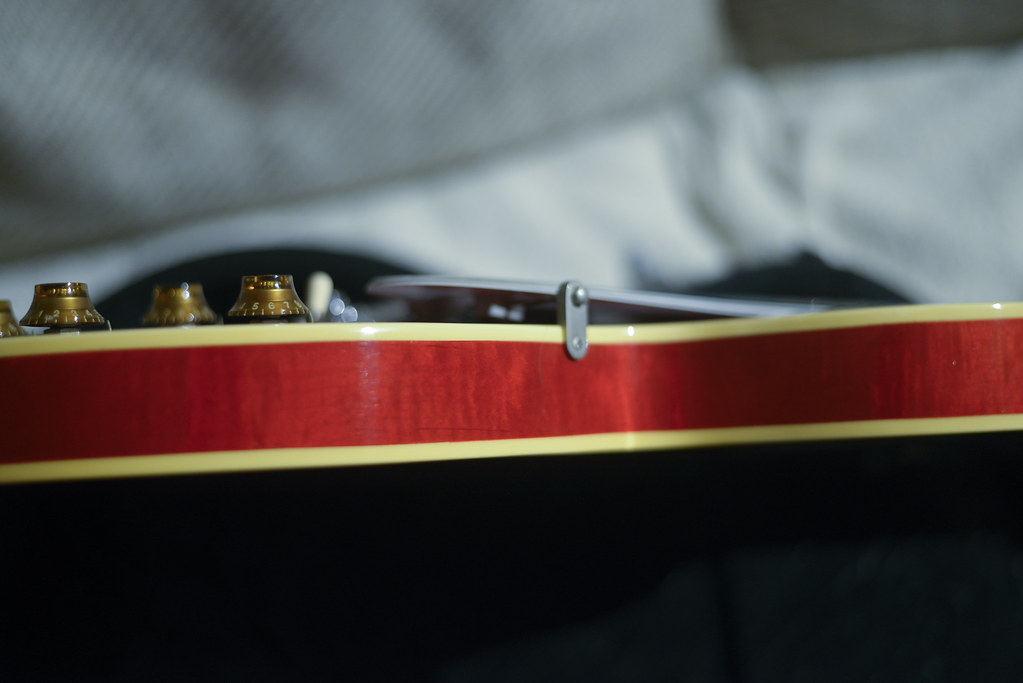 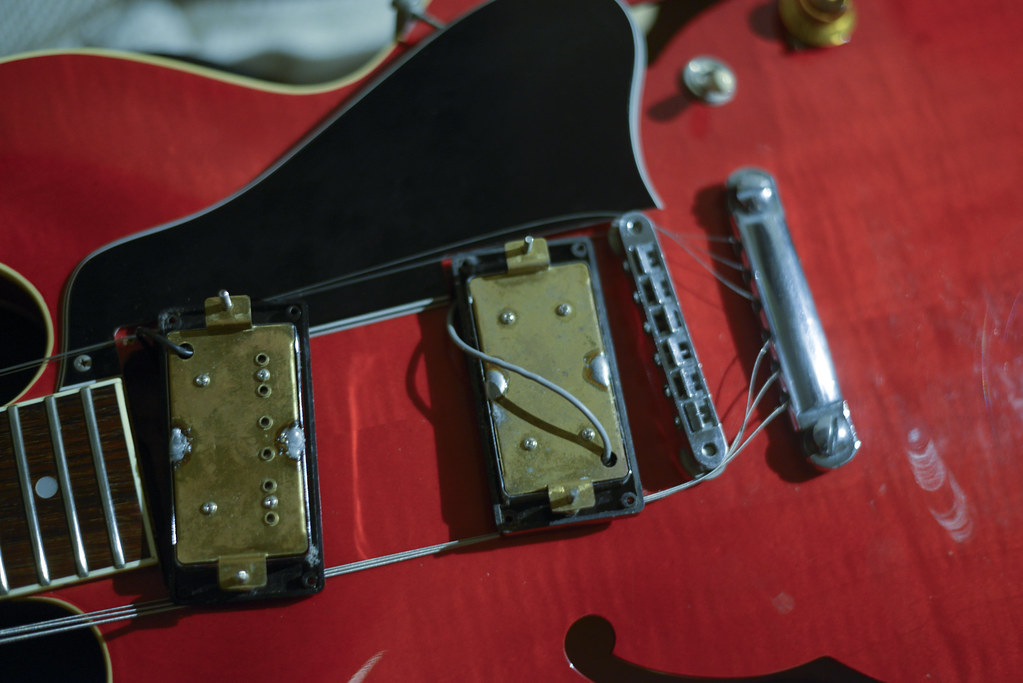 Changing strings tonight, so got my callipers out.

I didn't measure my ES 120 before I sold it, but there are measurements in this post which sound about right: http://www.tokaiforum.com/viewtopic.php ... highlight= and show it to be slightly narrower at the nut and 12th fret, but slightly deeper at both. So the ES 90 is a little wider and flatter, which seems about right judging by the feel.

Still significantly deeper than a modern ES-335 though, according to the post linked to above, which is only slightly wider at the nut than the ES-90 and by the 12th fret is narrower.
Top

Got some more info on this.

I emailed Tokai Japan and they actually responded within a few hours. Excellent service. Here are my questions with their answers:

- What are the pickups in this guitar?
PAF-Vintage MK1 is Tokai original P.U. made in Japan.

- Is the finish poly or lacquer?
It must be Urethane finish

- Was this guitar produced in small numbers, because there doesn't seem to be much information on them? The ES-120 from the 2000s seems much more common.
I am afraid that we do not know how many quantities are released on the market at the time.

They also attached a page from the 1991 catalogue, which they say was current in 1993.

The specs are identical to those in the 1990 catalogue I mentioned in another post, so I'll copy and paste my summary :

All are maple laminated top, side and back with mahogany necks. LS-VB bridge, LS-VT tailpiece, controls 2V 2T 3 way sw.

The ES180 is listed as 'flame maple', so I assume the 90 and 120 are a plainer top. Of course mine is flame maple, but quite subtle, so perhaps the ES180 is the really flamey stuff. As an aside, the ES180 has an ebony rather than rosewood fretboard and also has the fancy block markings, similar to (but not the same as) an ES345.

Pickups on all are PAF Vintage MK1, and they are all available in sunburst, natural and red. The ES90 alone is also available in black.
Top

Really nice find, I'd love to get this guitar.
If you think about selling it and you're located in EU, please write me a pm.
Top

A bit more info from Tokai Japan, who I emailed again. They have confirmed that the PAF-Vintage MK1 pickups in my guitar have Alnico V magnets.
Top
Post Reply
6 posts • Page 1 of 1